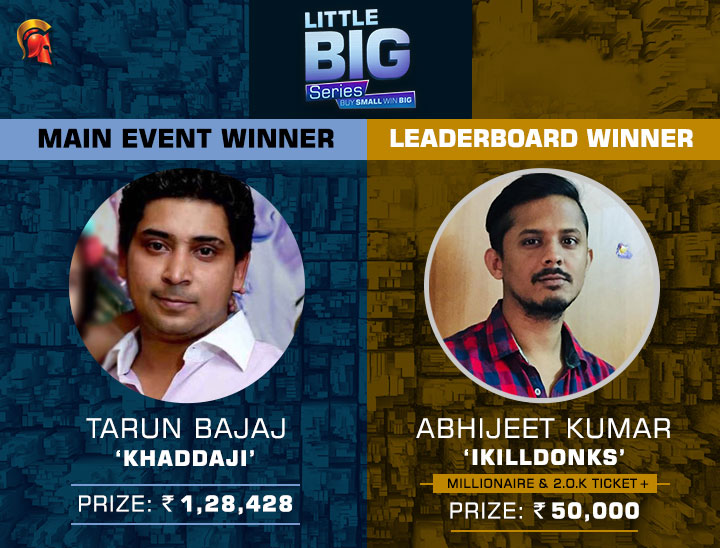 
The recent conclusion of Little Big Series (LBS) on The Spartan Poker saw a huge turnout with many guarantees crushed and huge payouts to the players. The series was scheduled from 22-25 February with 18 tournaments which also included big tournaments like Mini Biggie, Warm-Up and Main Event. The series also had a PLO tournament on the second day with a buy-in of INR 55 guaranteeing INR 20,000. Last night saw the showstopper Main Event with a buy-in of INR 1,100 guaranteeing a prize pool of INR 5,00,000. The tournament saw 662 entries crushing the guarantee and making it into INR 6,62,000 which was collected by the top 55 places with a min-cash of INR 3,244. The eventual winner was Tarun ‘khaddaji’ Bajaj who claimed the title for INR 128,428 defeating ‘Atypical’ in the heads-up battle. ‘Atypical’ took home INR 81,426 for the second-place finish.

23-years old Abhijeet Kumar is playing poker for 3 years and is a B.E graduate from JSSATE Bangalore. Kumar used to play home games with friends. In live, he has played DPT event last year. Speaking about the leaderboard, “The very first day of the series wasn’t that good but got ITM in one of the events. Thereafter it was pretty good and been ITM 8 more times, made 5 final tables and won 3 tournaments. In the last week I concentrated only on the LBS events and didn’t play much of other tournaments during the series. Leading was not easy as ‘roggerr’ was good during the entire series as he was leading till 3rd day. I was just 20 points ahead on the last day and busted ‘roggerr’ in the second last event. This bust out gave me a good number of points to top the leaderboard.”

Congratulations to all the winners and money finishers at the Little Big Series. Stay tuned to GutshotMagazine.com for more such updates.