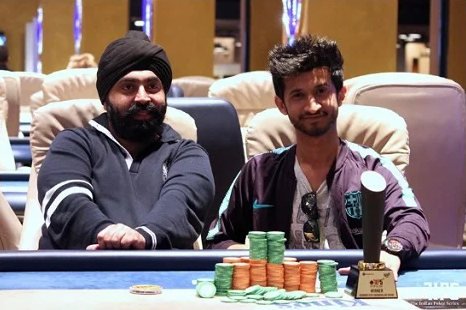 
The Indian Poker Series (TIPS) made its debut at the Kings Casino in Rozvadov, Czech Republic, scheduled between 15-20 August and concluding yesterday. While several Indians bagged cashes in various tournaments during the series, we had to wait long for a title to come home.

The wait finally ended on 19th August, when the TIPS High Roller kicked off. The tournament had a buy-in of €500 (~INR 40,000), which was considerably higher than the usual buy-ins in this series, which was thought of keeping in mind budgetary restraints of Indian poker players.

A total of 41 entries (36 unique + 5 re-entries) registered to the tournament, with a prize pool of €19,475 being generated and the top 5 players sharing the spoils, with a min-cash of €1,850. You know it was a tournament dominated by Indians, when you see the final pay-outs and 4 out of the 5 who finished in the money were Indians.

Chopped the HR with my friend Tanvier Kohli aka Ron the Don. 🏆🎰Shoutout to Samay bhaiyya for finishing 3rd, was a…

Popular player Samay Parikh finished in 3rd for €3,165 (~INR 2.54 lakh), while Pranay Chawla finished 5th for €1,850 (~INR 1.49 lakh). Chawla bagged a cash earlier in the series while Parikh has been a regular winner in live and online poker tournaments. Overall, it was a great performance by Team India in this series, winning its first and only title in the inaugural TIPS.

Gutshot caught up with Tanveer Kohli after this win. He said, “The journey was crazy and extremely amazing, full of fun and sleepless nights. My Kings at kings got busted a couple of times. Ace-king four times in this high roller and the two hands which were really crazy and. Extremely lucky were K8 vs A6 and A2 suited vs A9 against the Power Pro Samay Parekh back to back which got him out and me into the finals with a massive stack.” When asked about his future plans, he said, “Future is poker.”