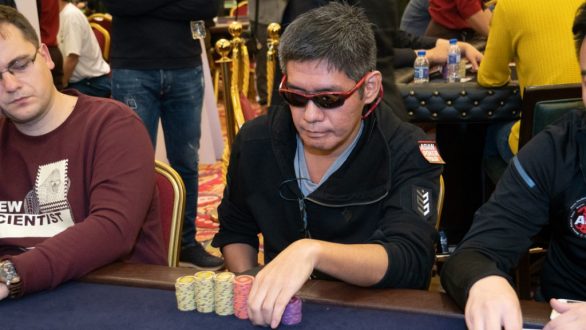 
The Asian Poker Tour (APT) Finale 2018 is happening at Resorts World Manila as we speak. The Main Event of the series saw 149 players return from the starting flights to Day 2.  Additionally, 43 signed up on Day 2 making a total of 307 entries. The registration was closed an hour after Day 2 started.

The guarantee of PHP 10 million was already crushed in Day 1B, with the official prize pool reaching a staggering PHP 14,889,500.

Only 56 players remained to see Day 3, which is to begin today, 1pm local time. With pay-outs going to 52 players. The bubble is expected to burst quickly today, and players will start getting paid.

Leading in chip counts is Japan’s Takao Shimizu with 308,500 chips. He was third entering the day but managed to take the lead. Shimizu’s recorded live tournament career began in 2017 at the Macau PokerStars Championship. He has played all over the world since then, Barcelona, Melbourne, Las Vegas and a bunch of cities in Asia. His biggest live win was finishing 2nd at the WPT Vietnam Main Event in September of this year, bagging $73,210.

Shimizu is quite skilful at this game, with his live winnings estimated to be around $357,352. For a player who mostly plays in Asia, this is a big figure. With his chip lead, he will add more to his bankroll which will enable him to play in more tournaments in the future.

Korea’s Chang Jae Lee with 286,500 chips is 2nd. He got lucky against Anton Del Rosario in a hand and dodged elimination. English player Sam Welbourne rounds up top 3 in chip lead with 273,000. Just one big blind under him is the APT Philippines Championships winner Lim Yohawn aka ‘Boxer’ with 270,500.

The final 56 players will enter Day 3 today which begins at 1pm local time with blinds at 2K/4K/4K (big blind ante). Once the bubble bursts and the cash starts to flow, all the players will have their eyes fixed on grabbing one of the 8 seats at the Final Table and be one step away from reaching the 1st place money of PHP 2,844,200 (~INR 37.85 Lakhs).