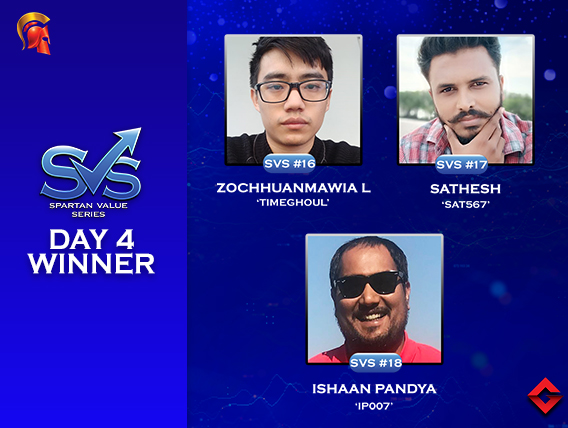 
Yesterday was the fourth day of the Spartan Value Series (SVS) on Spartan Poker which is assuring you INR 66+ Lakhs GTD. While five tournaments ran through the entire day, players were excited about the March edition of Millionaire Lite which displays a buy-in of INR 1,650. And here is a complete summary of SVS Day 4…

As the SVS is nearing its end, Event #16, which is the first tournament of the day attracted a total of 316 runners for a buy-in of INR 110. The entire competition collected INR 31,600 prize pool shared among the top 23 players who locked INR 366 as min-cash. Outlasting the field was Zochhuanmawia Lailung aka ‘Timeghoul’ who defeated ‘Hemusangani’ in heads-up to bag his first title of the March series.

Bagging his third SVS title in the ongoing series, after already taking Event #14 on Day 3 and Event #3 on SVS Day 1, Sathesh aka ‘Sat567’ climbed up the list once again! The second tournament of the day commenced at 3 pm yesterday for a buy-in of INR 275 which registered a total of 209 entries. Out of this number, the top 17 finishers ended up earning a share from the bigger prize pool of INR 52,250.

The third tournament of the day displayed a buy-in of INR 385, pulling a total of entrants 176 entries out of which the top 15 places earned at least INR 1,260. Capturing the first-place prize money was Ishaan Pandya aka ‘ip007’ who topped the list after the players settled for a five-way deal which saw ‘PokerStars090’ in second place.

SVS – The Millionaire Lite (Day 1B)

The multi-flight Millionaire Lite INR 35 Lakhs GTD kicked off at 6 pm yesterday. For a buy-in of INR 1,650, the event registered a pretty good field. Day 1B ended with ‘untouchables’ acquiring the largest stack of 2.12 million while Kanchan Sharma aka ‘Bubblegum’ bagged 1.92 million in the second place.

A total of 189 runners entered the tournament after paying INR 770 and the top 17 places ended up earning a min-cash. Topping the field was ‘snapChat!’ after the players struck a heads-up deal and his larger stack of 618k was enough to attach the SVS title to his poker CV while ‘boondikaladdu’ settled in the runner-up position.

INR 550 was the buy-in to enter the final tournament of SVS Day 4. A total of 480 runners joined the field and the entire event collected INR 2.40 Lakhs in prize pool which was distributed among the top 39 places. In level 38 of the tournament, the players settled for a heads-up that saw ‘WhySoSick’ in the first place while Kunal Sharma aka ‘cvc’ ending in the runner-up position.