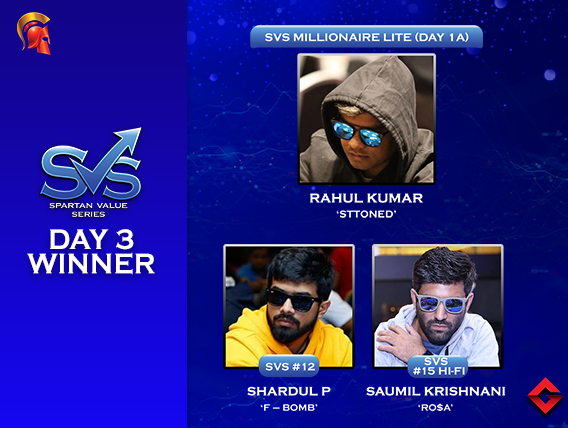 
And the most-awaited Millionaire Lite INR 35 Lakhs GTD is here on Spartan Poker. The multi-flight tournament, Spartan Value Series (SVS) Millionaire, kicked off yesterday to continue till 8 March. Apart from the that, other 5 tournaments also wrapped up last night and here is a complete summary of SVS Day 3…

The first tournament of the day commenced at 1 pm which had a fixed buy-in of INR 165 pulling a total of 239 entrants out of which only the top 20 places received a paycheck. Grabbing the first title was ‘Bluffbunny’ who railed out Tejas Kadam aka ‘kood’ in heads-up with his flush over Kadam’s two pairs of Kings and Tens.

INR 550 was the buy-in to enter the second event of the day. Registering a total of 268 entrants enough to surpass the advertised guarantee to collect INR 1.34 Lakhs in prize pool. It was circuit popular Shardul Parthasarathi aka ‘F – Bomb’ who secured the first-place prize money after dominating his opponent ‘Profishnull’ in heads-up with his two pairs of 8855.

Outlasting the field was ‘isildurr_5’ in event 13 of SVS which commenced at 5 pm. Fetching a total of 159 entrants for INR 275. It was in level 24 of the tournament, that the players settled for a 4-way deal which saw ‘ECTOBOT’ in the second place. And ‘isildurr_5’ carrying the largest stack of 296k claimed the first place.

SVS Day 1 Even #3 champ, ‘Sat567’ once again rode past a field claiming the winner’s title after the players settled for a 4-way deal in level 27 of the tournament. The entire tournament pulled out 168 runners for INR 550 buy-in and the top 17 places secured at least INR 1,800 in min-cash.

March edition’s Millionaire Lite is here with a buy-in as low as INR 1,650 only! The multi-flight tournament saw 548 hopefuls pouncing on the field to grab the top position on Day 1A. However, after several hours of intense grinding, it was Rahul Kumar aka ‘sttoned’ who possessed the largest stack of 268,424 chips. Kumar is followed by Dhirendra Kumar aka ‘dhiru91’ in the second place bagging 186,306 chips to Day 2. Recently on Monday, Rahul Kumar finished second in the ReCharge after a heads-up deal. For more, click here.

SVS Day 3 ended with Hi-Fi being the last tournament. It was circuit grinder Saumil Krishnani aka ‘Ro$a’ who was announced as the official winner after the players settled for a 4-way deal which saw ‘Profishnull’ earning the second-place payout. The entire tournament registered a total of 536 entrants enough to crush the guarantee and generate INR 2.68 Lakhs in prize pool.