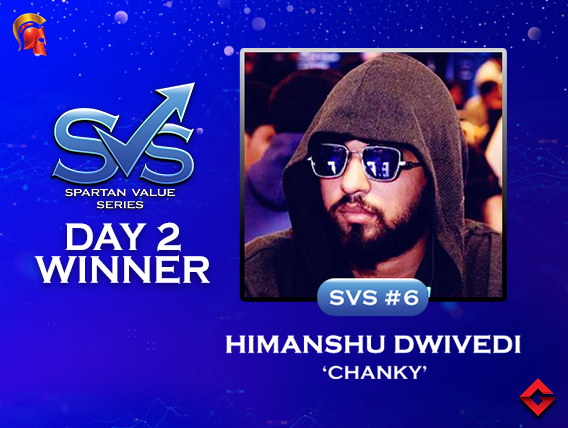 
And it has been a power-packed week cramped with players both in online and live felts. The much-awaited low/mid stakes tournament series, the January edition’s Spartan Value Series (SVS) is right here and the start has already been fabulous! By now the country knows that Spartan Poker keeps designing varying tournaments and advertising huge guarantees. So does the SVS portray, promising a series guarantee of INR 48+ Lakhs which will be hosting 21 different events. And here is a complete summary of SVS Day 2…

The first tournament of the second day saw a total number of 373 entries with each one chipping in the lowest buy-in of INR 110. The advertised guarantee was surpassed, generating a bigger prize pool of INR 37,300 which was distributed to the top 23 places securing a min-cash of INR 432. However, grabbing the biggest chunk of the same was Himanshu Dwivedi aka ‘Chanky’ who was announced the official winner after a 5-way deal. And the winner pushed away ‘Ambu’ in the runner-up position for INR 6,787 as the first-place prize money.

INR 330 was the buy-in to the second tournament of the day and a field of 139 entries registered which was just enough to break the guarantee, creating a new prize pool of INR 41,700. The top 11 positions were paid out with a min-cash of INR 1,043 but ‘ManiacKid’ had his eyes on the prize and nothing less. He outlasted the field to earn the SVS title and the prize money after he beat ‘Yashi9696’ in heads-up, the latter winning INR 8,152.

In level 25 of the tournament, ‘ManiacKid’ held 7h 9h Qh 3c up against his opponent ‘Yashi9696’ who had 9s Ts Kh 6d. The former hit a straight on flop Td 8h 6c while the latter drew single pair of Kings. Turn Ah appeared blank for ‘Yashi9696’ who eventually found his second pair on river Kd yet couldn’t manage to dominate ‘ManiacKid’ who shipped the tournament for INR 11,468.

188 entries registered in the third tournament of the day, each paying the INR 165 buy-in and smashed the assured amount, taking the prize pool up to INR 28,200. Once again, the slice was shared by the top 13 positions, each receiving a min-cash of INR 578. However, after finishing second in Event #3, ‘Yashi9696’ didn’t want any of these small prizes and earned INR 6,369 for his efforts. As for the runner-up position, it went to ‘kilpauk’ who was paid out INR 5,465. The tournament ended after a 3-way and ‘Yashi9696’ carrying the largest stack of 539k was announced the official title holder.

The final tournament of the day was Hi-Fi which happens to be the most popular daily tournament on Spartan Poker. The guarantee was passed and once again, it attracted a decent field of 268 entries which pulled out the prize pool to INR 4,02,000 which was later shared among the top 27 places with a min-cash of INR 4,020. It was a good end to the night for anonymous but online grinder ‘space ace’ who ended up shipping the tournament and boosting his poker bankroll. In heads-up, he beat ‘dvaio’ who earned for his runner-up finish!

In level 31, ‘space ace’ held 8c Js 9s Ac up against ‘dvaio’ who had Qc Ts Kh Kc, eventually, the former who completed a straight when the board ran 2c Qs 7d Ts 8d, while the latter couldn’t stand against ‘space ace’ after flipping his two pairs of Queens and Tens.