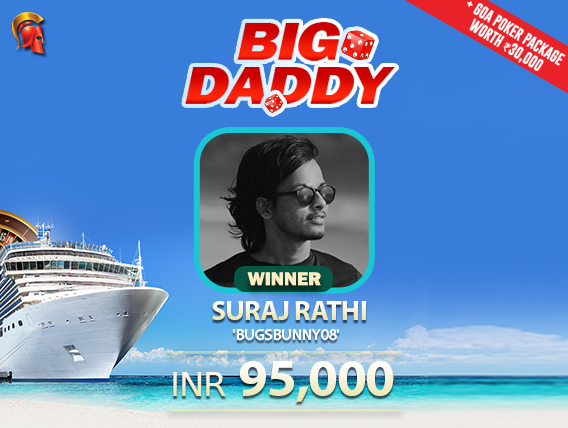 
Sundays on The Spartan Poker are always special because you find a wide array on tournaments being hosted including the INR 5 lakh GTD Big Daddy tournament. Now the specialty of this one is that the winner not only takes away tournament winnings but also an INR 30,000 package trip to the Big Daddy poker room in Goa!

This Sunday, a strong field of 445 entries registered to the tournament, of which only the top 45 were paid out a min-cash of INR 2,750. Coming out on top of the field and taking away the top prize was Suraj Rathi aka ‘Bugsbunny08’ who was rewarded with INR 95,000 in cash, to go with a package trip to play poker in Goa and a chance to multiply his winnings there.

Rathi is just 21-years old – a poker player from Erode, Tamil Nadu. Like most, his poker journey began in college when he was introduced to the game by his seniors. “I vividly remember it was a Diwali night and everyone gathered at a senior’s place where they were playing poker. Initially, we started playing cash games for 100-200 bucks for fun but quickly moved up to 2k- 3k. I was introduced to online poker by one of my flatmates (I wish I could take him to Goa) and I thought it was cool and faster than live. I started playing low stake cash games on PokerBaazi and lost for a while.”

He said, “I did some research and found the importance of studying off the tables. So, I started watching a few YouTube videos and made some money but after a few months I got bored with cash games so I decided to shift to MTT’s. Though the variance is too high in tournaments, it is much more fascinating than cash. I started winning a few small tournaments here and there and kept on going. It was only last year when I joined IPPA and realized what true studying means. So, I started watching a few Twitch streamers and working with HRC, Flopzilla, Poker stove etc., and also started working on my physical and mental fitness. I felt a huge improvement in my game and started winning some decent money in tournaments.”

Rathi also commented on the Big Daddy victory, saying, “I think it went on pretty smoothly till the Final Table. When we reached the FT, I was in the middle of the pack and the last two guys were super short, so had to take my spots carefully. I have been working really hard on my short stack game for the past couple of months so I really liked my chances. To be honest, I don’t remember many key hands except for when we were 3-handed and I was 2nd in chips with 8BBs and the third guy had around 5 BBs and the chip leader shoved on us. I decided to take my chances and called it off with A5o against his Q9s and luckily it held. At the start of the heads up, I was 6:1 underdog but was confident that I could make a comeback. I remember that he was very aggro against my limps so I started limping premium hands to trap him and he eventually punted off his stack against my limp re raise on K10s against my pocket QQ and was left with a handful of big blinds. This win is close to my heart because I was on a huge downswing on Spartan for the last 2 months and the Goa trip is a cherry on the top. My future plans are working super hard on my game and become one of the top regs of the country and maybe bring a couple of bracelets home so that I can give Gutshot Magazine more interviews. JK. Lastly, I would like to thank Sampa Haldar and Gutshot for the feature. Good luck at the tables!”