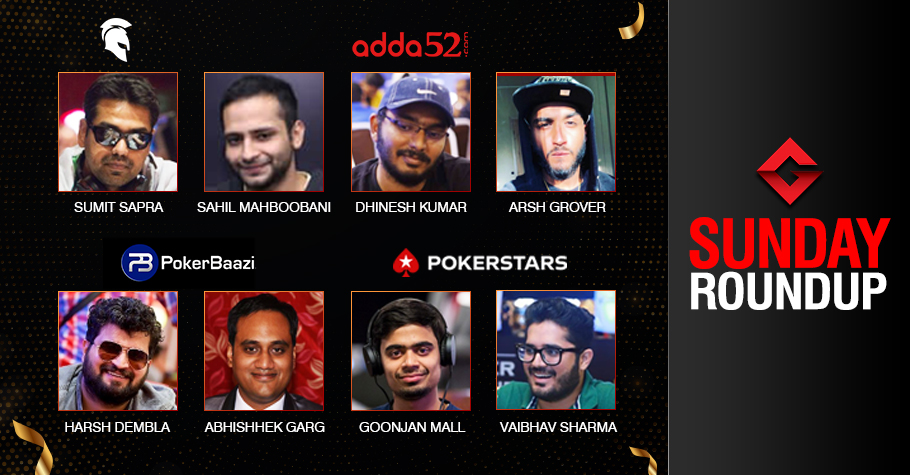 
Another Sunday lit up the domestic felts with big winners taking away bundles of cash prizes. The newcomers and regs across the country took advantage of the massive tournaments and guarantees. So, keep reading to find out the ultimate champions of Sunday night…

Spartan Poker’s Sunday flagship tourney Sunday SuperStack INR 40 Lakhs GTD kicked off at 8 pm last night garnering a field of 804 entries. Coming out on top was a mystery player ‘Richie4ich’ who shipped the event after grinding for over 9 hours. It was ‘BuddyLove’ who secured the second place payout. Before the tournament concluded the top 79 players added INR 13,668 min-cash to their poker bankrolls.

The three-day tourney FMS #20 Main Event INR 50 Lakhs GTD on Spartan Poker crowned the champion in poker pro Sumit Sapra aka ‘Sands Myth’. It took 4+ hours for Sapra to outlast the field and grab the largest share of the final prize pool. Money reached the top 63 places who banked INR 21,750 min-cash. He eliminated ‘Sid297’ in heads-up battle who settled in the second place.

PokerBaazi’s mainstay Sunday event, the BSS SuperStack INR 25 Lakhs GTD clocked in 501 entries resulting in INR 25.05 Lakhs prize pool. Making the most of the value on the offer were the top 63 players who went out grabbing a min-cash. Abhishek Garg aka ‘abhi3333’ shot to the top, claiming the title and capturing INR 4.87 Lakhs in first-place prize money after knocking out ‘classic6048’ in heads-up who secured INR 3.41 Lakhs for finishing second.

With a buy-in of INR 2,750, PokerBaazi’s BSS Monster 6-Max INR 5 Lakhs GTD saw 197 entries out of which only the top 24 places were paid a min-cash of INR 4,800. Capturing the first-place cash prize was site reg Harsh Dembla aka ‘100crdream’ who defeated out Sagar Choudhury aka ‘sagarpupul’ in heads-up and banked INR 1.21 Lakhs in first prize. Choudhury grabbed INR 84,650 for finishing runner-up.

Lighting up the virtual felts was INR 1 Crore GTD Full House Finale on Adda52. After several day 1s, outlasting a massive field was the rising star, Dhinesh Kumar aka ‘dinzy009’, who conquered the day to become the biggest winner last night. The finale saw a total of 197 players taking their seats. At 4:31 am, Kumar railed out ‘bajateraho’ in heads-up to clinch to a whopping INR 25 Lakhs in top prize. The latter earned INR 13 Lakhs for his efforts.

Sahil Mahbooobani aka ‘ImHighIshove’ displayed top form on Adda52 yesterday as he outran a field of 267 entries to take down the Adda52 Millions INR 25 Lakhs GTD. This led to the creation of INR 26.70 Lakhs worth prize pool. Money reached the top 27 places, but the lion’s share belonged to Mahboobani. The winner defeated Ayush Garg aka ‘lazyman’ in heads-up and claimed INR 5.05 Lakhs in prize money. The latter went out with INR 4.70 Lakhs for finishing second.