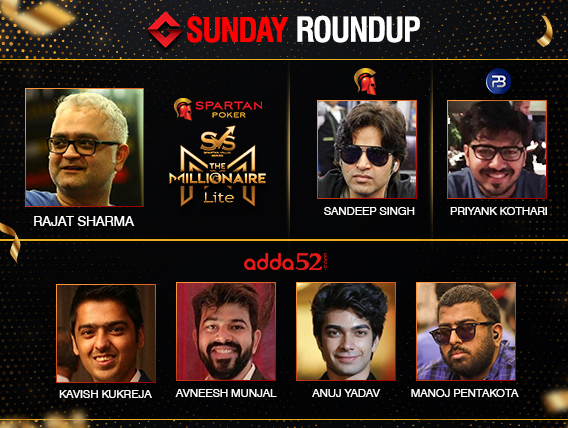 With a buy-in as low as INR 1,650 fetched a total of 2,449 entrants in Spartan Poker’s major attraction Millionaire Lite. This February edition’s millionaire assured INR 10 Lakhs to the first place and the one to take away the limelight was circuit popular Rajat Sharma aka ‘Garammasala’ who conquered the field after grinding for more than 6 hours and knocking out Bhanu Prakash aka ‘spectre’ in heads-up.

Running alongside Millionaire Lite was Sunday SuperStack INR 35 Lakhs GTD which continued till 5:50 am and eventually Sandeep Singh aka ‘SandeeSingh’ topped the field after eliminating Kanav Parwal aka ‘SneakyBlinders’ in the runner-up position. Singh battled out a field of 709 entries from which 71 finishers ended in the money.

In level 52 of the tournament, Singh had 5♠ 6♣ and Parwal with 9♦ 2♣. Both players checked on flop 9♣ 3♥ Q♣ and eventually, Singh hit a straight with 7♥ 8♣ on turn and river, respectively, and Parwal failed to dominate him with his single pair of 99 ended in the second position.

The event gradually collected a prize pool of INR 35.45 Lakhs which was distributed to the top 71 finishers including Hitesh Batra aka ‘hitesh bhai’ (3rd), Chirag Sodha aka ‘chilling’ (6th), Sumit Sapra aka ‘Sands Myth’ (6th), Guneet Kwatra aka ‘guntz’ (21s), Mithun Mahesh aka ‘Intuitionnn’ (35th), Manish Lakhotia aka ‘thekid’ (38th), Gaurav Sood aka ‘mozzie17’ (62nd), Vivek Singh aka ‘KasolHieghts’ (66th) and so on.

Adda52 hosted Freeroll INR 21 Lakhs after the site added another flight to the AOPS Main Event that drew a lot of controversies. Last night pulled out 334 entrants and it was 2:42 am when Kavish Kukreja aka ‘narcoss’ gave a standout performance collecting INR 4.10 Lakhs in prize money after defeating ‘pkpok’ in heads-up.

Running simultaneously with Freeroll on Adda52 was Millions AF INR 20 Lakhs GTD. A total of 271 entries pounced on the field smashing the guarantee to create INR 27.10 Lakhs in prize pool and eventually circuit grinder Manoj Pentakota aka ‘thatsmymoney’ took away a hefty INR 7.04 Lakhs in prize money after defeating Loveleen Singh aka ‘pharlap’ in heads-up who managed to bag INR 4.20 Lakhs.

Sundays are reserved for two feature tournaments and one of them is Big Slick AF INR 15 Lakhs GTD which displayed a fixed buy-in of INR 2,500. The action picked up at 4 pm and eventually the prize pool was shared among the top 71 places, but the one to ship the biggest share from the same was Avneesh Munjal aka ‘iamam’ who captured INR 2.35 Lakhs. Munjal eliminated Sahil Mahboobani aka ‘imhighishove’ in the heads-up play who eventually bagged INR 2.32 Lakhs after falling in the runner-up position.

Sunday on PokerStars was about Sunday Special PKO INR 15 Lakhs GTD, a bounty tournament which kicked off at 5 pm sharp. Each player chipped in INR 5,500 buy-in to enter the competition and eventually after long intense hours, the star of the night was ‘Wabi-$abi’ who pocketed INR 1.67 Lakhs after outlasting ‘Artooriouss’ in heads-up sending him in the runner-up position.

9stacks’ Super Series hosted the major attraction Main Event INR 9 Lakhs GTD which had a buy-in of 2,750 and drew a total of 324 entrants out of which the top 45 finishers ended up earning a payout. It was an anonymous grinder ‘Morpheaous1’ who added INR 2.16 Lakhs in prize money after beating Manas Nayak aka ‘Batman7796’ in heads-up who bagged INR 1.44 Lakhs.