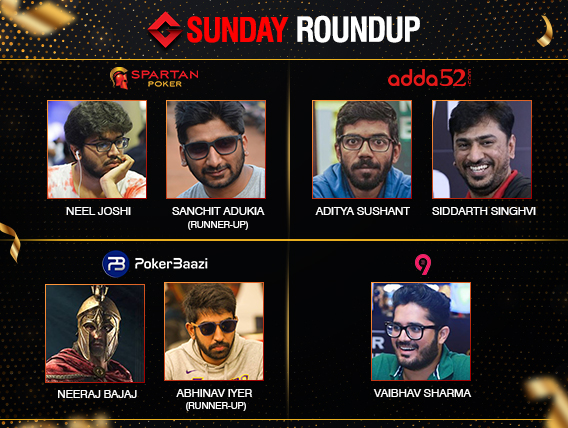 
It was a terrific Sunday night across the virtual felts in the country. Sundays are all about bigger guarantees and a variety of tournaments that line up for players belonging to different stakes. The major attraction on Spartan Poker was the Sunday SuperStack promising INR 35 Lakhs, BSS Superstack on PokerBaazi assured a prize pool of INR 25 Lakhs while AOPS on Adda52 also wrapped up last night, other sites too attracted enthusiasts in huge numbers. Here is a complete summary of Sunday majors…

Last night was an action-packed affair on Spartan Poker hosting Sunday SuperStack INR 35 Lakhs GTD. A field of 777 entries registered with each paying INR 5,500 buy-in that was enough to cross and smash the guarantee to create a final prize pool of INR 38.85 Lakhs out of which the top 71 finishers earned paychecks. A well-known circuit grinder Neel Joshi aka ‘Worm22’ topped the list after the players settled for a 4-way deal which saw ’tullupump’ in the official second place.

The OFC Championship was also on the schedule in Spartan Poker. This one-day tournament series comprised of a total of 4 tournaments with guarantees ranging from INR 15k GTD to INR 2.75 Lakhs GTD. The day began with Event #1 that pulled out 160 entries after each chipped in INR 110 buy-in. The assured amount was surpassed creating a slightly bigger prize pool of INR 16k, shared among the top 40 players but the one to grab the first title was ‘tripacesontop’ who eliminated ‘Mayaksh’ in heads-up.

The second tournament of the day had a bigger buy-in of INR 550 pulling out 155 entrants that ultimately saw the creation of prize pool of INR 77,500. Capturing the biggest portion of the same was ‘AkkiZed’ who knocked out ‘kiran713321’ in heads-up.

INR 1,100 was the buy-in to enter the third tournament that garnered 105 players out of which the 25 finishers ended in the money. Ultimately, it was ‘Dr House’ to seize the first-place prize money after defeating ‘sharmaanuj7777’ in heads-up

The one-day event ended with OFC Championship #4 being the final tournament. Both the buy-in as well as the guarantee increased to become INR 3,300 and INR 2.75 Lakhs, respectively. It was Venkata Suman aka ‘suman314’ who conquered a field of 86 entries and outlasted the Event #1 winner (read above) ‘AkkiZed’ in heads-up to bag the first-place prize money.

The biggest guaranteed tournament on PokerBaazi last night was BSS SuperStack INR 25 Lakhs GTD which enrolled a total of 493 entries after paying a fixed buy-in of INR 5,500. It was Neeraj Bajaj aka ‘neeraj2828’ to capture the winner’s title after knocking out WSOP bracelet winner Abhinav Iyer aka ‘griezmann’ in heads-up. Bajaj seized INR 4.85 Lakhs in prize money while Iyer took away INR 3.40 Lakhs for settling in the second position.

INR 2,750 was the buy-in to enter PokerBaazi’s The Monster INR 5 Lakhs GTD. The tournament registered 274 entries which led to the creation of a higher prize pool of INR 6.85 Lakhs, received by the top 36 places. It was January’s Millionaire Lite winner Dhinesh Kumar aka ‘dhineshrocky007’ to ship the tournament and earn INR 1.51 Lakhs only after knocking out India’s biggest online poker winner Anurag Srivastava aka ’13anurag’ who bagged four titles last week, here finishing in the second position!

Capturing the attention on Adda52 was the AOPS Main Event guaranteed INR 1.5 Crore with 3 starting flights on the schedule. The site announced an additional flight in the last minute registering a total of 1,442 entries out of which only 150 survived and resumed Day 2. It was Day 1A chip leader ‘blunt420’ who emerged victoriously and captured a handsome INR 31.24 Lakhs in prize money while Aditya Agarwal aka ‘iamherenow’ finished in the runner-up position.

Adda52 has reserved Sunday night for two feature tournaments, apart from Mega Suits, another major attraction on the site was AOPS Big Slick INR 20 Lakhs GTD displaying a fixed buy-in of INR 2,500. After hours of grinding, it was a prominent face in the industry Siddarth Singhvi aka ‘badtameez_donk’ to take down the tournament for INR 4.77 Lakhs in first-place prize money.

A part of the ongoing Adda52 Online Poker Series (AOPS), running simultaneously with the Main Event was another featured tournament named AOPS Mega Suits that assured INR 30 Lakhs GTD. The event had a slightly bigger buy-in of INR 5,500 that pulled out a pretty good crowd which was ultimately conquered by the WSOP bracelet winner Aditya Sushant aka ‘A_Sushant’ who added another feather to his illustrious poker cap and boosted his bankroll by adding INR 7.47 Lakhs in prize money.

PokerStars’ headlining tournament was Sunday Special Progressive KO INR 15 Lakhs GTD that attracted 327 entries for INR 5,500 buy-in. The advertised guarantee was surpassed and eventually, a bigger prize pool of INR 16.35 Lakhs was generated from which the top 55 places took home a paycheck. It was at 1:17 am that the dust had settled and the ultimate winner ‘callmebyurballs’ eliminated ‘azmaadh’ in heads-up to grab INR 1.31 Lakhs.

9stacks hosted The Joker INR 10 Lakhs GTD which garnered a total of 341 entries after each chipped in INR 2,750 buy-in. The top 45 places earned a min-cash, a share from the prize pool but the one to take away the largest chunk of the same was Vaibhav Sharma aka ‘GhaintJatti’ who captured INR 2.40 Lakhs in prize money after railing out Aravind Raju aka ‘BenDing_BuLLets’ in heads-up who took home INR 1.60 Lakhs for finishing in the runner-up position.