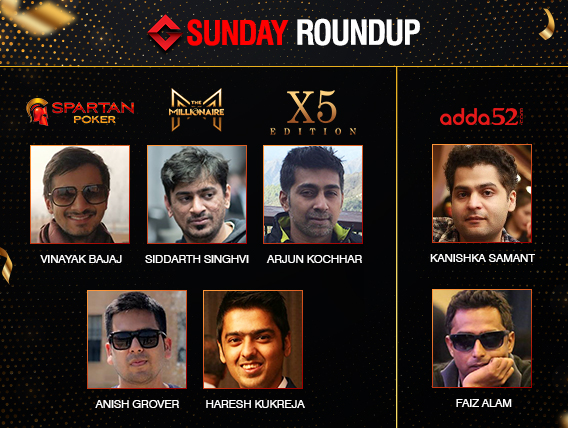 
A Sunday in online poker is as big as it can get for online grinders in the country and yesterday was no exception at all. Apart from features taking place across all platforms, we had the Adda52 Online Poker Series (AOPS) Main Event also taking place where an INR 2 Crore GTD prize pool was up for grabs. With the dawn of coronavirus, let’s just say that the online poker industry may only boom across the world. Regardless, let us take you through what happened yesterday across the virtual felts…

Millionaire is the biggest tournament offering on Spartan Poker and once again, the event didn’t disappoint, with players participating from across India, each putting in INR 5,500 as the buy-in. The massive field narrowed down to just 235 stacks when play resumed on Day 2 and when it finally boiled down to the end, the tournament halted when Venkatesh Mukundan aka ‘Borissss’ got knocked out in 6th place and all the remaining 5 were crowned winners, taking away INR 10 Lakh each.

Quite a few known names were in the 200 places that finished in the money, and the eventual winners were Vinayak Bajaj aka ‘tuktuki’, Siddarth Singhvi aka ‘PeterPunter’, Arjun Kochhar aka ‘avengers906’, Anish Grover aka ‘TheWitche007’ and Haresh Kukreja aka ‘Dietchips’. They all walked away with the same prize money and with that, another edition of the Spartan Super Series (SSS) came to an end on Spartan.

It’s not every day that you get to see such high-value tournaments taking place and yesterday, it was time for the Adda52 Online Poker Series (AOPS) to host its grand finale. Apart from other high guarantee events, the Main Event on Adda52 saw 178 players returning on Day 2, from which 177 finished in the money, each taking home a min-cash of INR 25,000. As we got deeper into the night, the prizes kept increasing and at 2:30am this morning, it was Faiz Alam aka ‘TheInternetKid’ who walked away with the title and a life-changing prize money of INR 50,00,000!

Faiz is a regular grinder but this became his biggest online victory by a long way. Gutshot caught up with the player immediately and he said, “It’s too early to say anything because it hasn’t sunk in yet, but it feels surreal. Scores like this don’t come often and I feel really lucky to be the guy who managed to get it. The field got a bit easier with the elimination of Raghav Bansal on the F2T and Sahil Chutani early on the FT. ‘NoobPro’ was playing quite aggressive with 6 left and was definitely the biggest threat, but somehow things worked out in my favour…”

Like Faiz mentioned, there were quite a few known professionals on the final table and that’s how you can differentiate poker from a game of luck of chance. Eventually, he landed up against ‘rahulpalawat’ in heads-up and the latter wasn’t good enough on the day, taking home INR 26,29,000 as the runner-up prize on Adda52!

Another regular part of their Sunday tournament line-up is Mega Suits and the guarantee was bumped up for this week as it was part of the AOPS series on Adda52. A total field of 829 entries registered to the tournament with an entry fee of INR 5,500 each and as the night progressed, we reached the money bubble, with 92 players being paid a minimum of INR 10,777 each.

The grind was a very long one, beginning at 8pm last night and going on until 4:56am this morning, where Kanishka Samant aka ‘kanishka27’ emerged victorious. One of the most popular faces in the industry, Samant added yet another title to his trophy cabinet, pocketing INR 9,53,350 for his efforts. In heads-up, he outlasted ‘PankajGul’ who had to settle for the runner-up prize of INR 5,47,140 last night.

All in all, it was a cash-heavy night in online poker, and we had a mix of new faces as well as known industry heavyweights who won titles. For similar updates on the online and live poker industry in India, stay tuned to GutshotMagazine.com.

Sing-up to PokerSaint using code “GUT100”. Also, check out our online poker rooms section, where you can read reviews on the biggest and best poker rooms in the country, while also taking advantage of their bonuses and promotions. Check out these top poker rooms HERE.