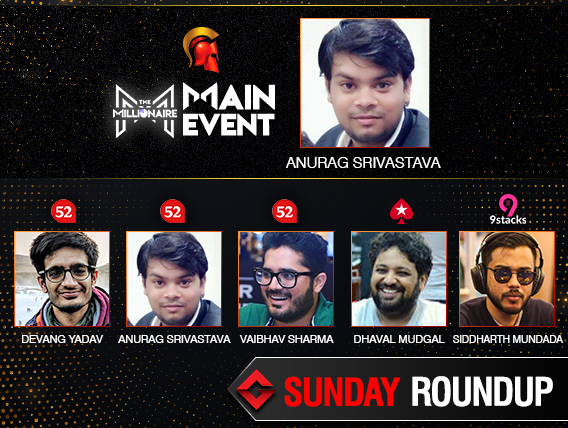 INR 3 Crore was the advertised guarantee of Spartan Poker’s The Millionaire Main Event. Comprising of eight starting flights and buy-in of INR 11,000 the entire event fetched over 3000+ entries which was enough to drive past the guarantee and create a record-breaking INR 3.49 Crore in prize money on Spartan Poker. The top 430 finishers earned a min-cash for their efforts. After 6+ hours of long haul on Day 2, the last man standing was Anurag Srivastava aka ‘Norman Bates’ who triumphed the night after defeating ‘PokerBadger’ in heads-up and attached the Millionaire title to his CV further boosting his poker bankroll with this 7-digit figure! Bagging a whopping prize of INR 59+ Lakh, Srivastava is now the biggest winner in online poker in India.

Gutshot caught up with the winner who said, “It was just a surreal moment at 5.15 in the morning, I will probably take some time just to digest it. I owe all my success to my coaches in IPP.”

A part of Spartan Poker’s IOPC, the Sunday SuperStack INR 40 Lakhs GTD began at 8 pm last night attracting 881 players after each one paid INR 5,500 buy-in. Creating a bigger prize pool of INR 44.05 Lakhs, the top 87 finishers profited from the same. However, it was ‘GGGenius’ who took down the Sunday feature after eliminating Pranav Chawla aka ‘MajhiSatakali’ in heads-up.

Players receiving a portion from the prize pool were Anuj Yadav aka ‘brockLesnar95’ (10th), Shagun Jain aka ‘sogani22’ (16th), Pranjal Gandhi aka ‘lilmessi’ (23rd), Anmol Mehta aka ‘anzzzzz’ (78th) and others.

Adda52 hosts two feature tournaments on Sunday night and one of them was Mega Suits Finale INR 50 Lakhs GTD which smashed the guarantee to become INR 60 Lakhs and the top 110 finishers ended in the money. Capturing the massive prize money was online reg Devang Yadav aka ‘spark123’ who added INR 12 Lakhs to his poker bankroll after defeating Danish Shaikh aka ‘king0fmerge’ in heads-up who settled for INR 7.12 Lakhs in the runner-up position.

357 players entered the AOPS Millions INR 30 Lakhs GTD on Adda52 which had buy-in of INR 11,000. Fate was in favour of Anurag Srivastava aka ‘normanbates’ who captured his second title of the day after already taking down The Millionaire Main Event on Spartan. Srivastava railed out ‘aarchit’ in heads-up and added another feather to his illustrious poker cap with INR 8.92 Lakhs in prize money. What a night it must have been for this player!

Other notable players to finish in the money include Guneet Kwatra aka ‘guntz’ (3rd), Arsh Grover aka ‘bigggtymer’ (6th), Pranav Bang aka ‘pranavbang’ (7th), Vaibhav Sharma aka ‘alienrobot’ (16th), Neel Joshi aka ‘neeljoshi23’ (29th), Sreekanth Narayan aka ‘n0thing’ (36th), Aditya Sushant aka ‘A_sushant’ (38th) and others.

INR 2,500 was to be paid to enter the Sunday’s feature on Adda52, AOPS Big Slick INR 20 Lakhs GTD. The entire tournament generated a prize pool of INR 20.22 Lakhs and the top 92 players earned a min-cash of INR 5,259. Powering through the field was Vaibhav Sharma aka ‘alienrobot’ after outlasting ‘dr1313’ in heads-up to seize the winner’s prize money of INR 4.65 Lakhs.

The headliner event on 9stacks (use code: “GUTSHOT”) last night was The Joker INR 10 Lakhs GTD which pulled out 363 players for INR 2,750. The top 37 finishers earned a payout for their efforts, but it was the 2019 IPC 10k Freezeout winner Siddharth Mundada aka ‘CallMeMaybe’ to seize the winner’s title, adding INR 2.45 Lakhs in prize money after railing out ‘tcs1194’ in heads-up who eventually managed to take home INR 1.65 Lakh for the runner-up position.

Other notable finishers include Harsh Bubna aka ‘harsh1327’ (3rd), Shashank Shekhar aka ‘biharibhaia’ (4th), Chandan Arora aka ‘darkfish’ (6th), Anuj Manocha aka ‘Desijuari’ (9th) and so on. For latest updates on live and online poker tournaments, keep reading GutshotMagazine.com and stay tuned!