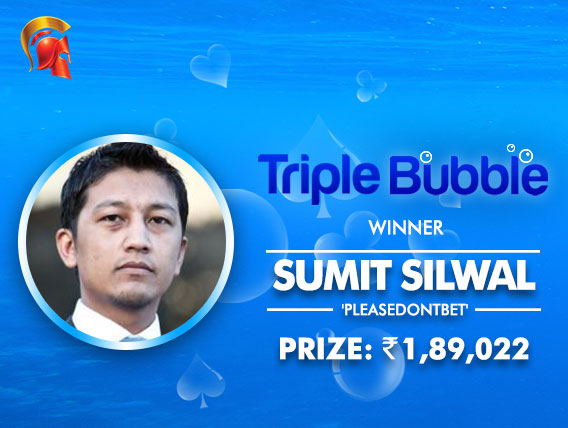 
The Triple Bubble is one of the most unique poker tournament offerings in India at the moment, where there aren’t one or two, but three prize bubbles. Obviously, no one likes to be the bubble boy, so The Spartan Poker came up with this tournament where the bubble players get an extra reward, so that they aren’t too disappointed at the end of the night.

This tournament takes place every Friday night and yesterday, there were a total of 271 entries that participated in Triple Bubble INR 7.5 Lakh GTD, with each entry coughing up the entry fee of INR 3,300. The good participation saw the guarantee being passed and a new prize pool of INR 8.13 lakh being generated.

From these, the top 23 players were paid out a minimum of INR 9,430 and the player who was the most dominant on the night was Sumit Silwal aka ‘pleasedontbet’. Riding on his second bullet of the night, Silwal managed to ship the tournament and was rewarded with INR 1,89,022 for the same.

The 9pm tournament ended after 4am this morning and the long grind would’ve taken its toll on the players. However, those who made deep runs wouldn’t have been disappointed, including ‘Alibaba_kings’ who finished runner-up for INR 1,28,047 and tickets to Spartan’s next The Millionaire and 2.o.K. tournaments.

Apart from the runner-up player, a couple of other bubble players were also rewarded. This included the FT bubble player ‘KOQ’ who missed making the final eight players but was rewarded with a ticket to tomorrow’s The Millionaire tournament. The money bubble player was ‘sanjaykotak75’ and this player won back his buy-in to the tournament of INR 3,300.

The tournament finally ended in Level #50, with the blinds at 15,500/31,000 – 3,100 and no one would’ve been happier than Silwal when he was declared champion. Towards the end of August, Silwal also won the Big Daddy tournament on Spartan, but this one of last night clearly is a much bigger victory for him.

In the final hand, he had pocket Nines and completed his set on the flop itself. Alibaba_kings on the other hand had a pair of Kings on the flop so he made a small bet, which was called by Silwal. Alibaba_kings then went all-in on the 3d turn card and Silwal made the call again, as the 5d river card didn’t improve any player’s hand and Silwal went on to become the winner.

Silwal spoke to Gutshot after this victory, saying, “I’m obviously feeling pretty happy with the result, but more satisfaction came from maintaining a comfortable above average stack throughout the tourney by applying certain concepts that I learnt recently from my coach Alok Ranjan. This was a totally different experience for me as the difference this time was that from the time we were in final 25 or so, I did not go all in even once. I would also like to give a shout out to Spartan for having such a deep structure. At one point almost all the remaining 5 players seemed frustrated coz we were all so deep and patience became the paramount attribute to have there.”