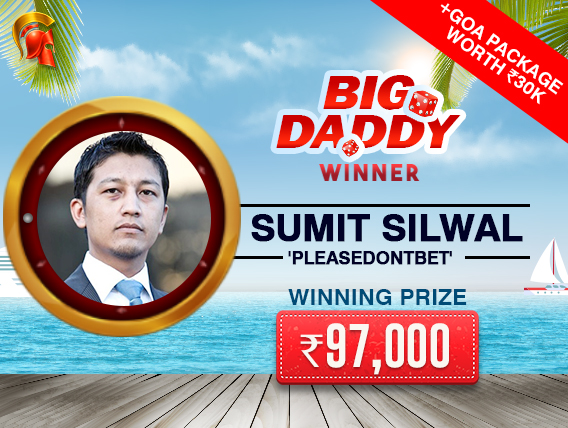 
Many high-guarantee tournaments make up the Sunday grind on The Spartan Poker each weekend. One of them is the Sunday SuperStack, which was won by Pulkit Goyal last night. Another one of them is the popular Big Daddy tournament, where the winner takes away not just his/her tournament winnings, but also a package trip (worth INR 30,000) to play poker in the Big Daddy poker room in Goa.

Yesterday’s Big Daddy tournament kicked off at 4pm IST, with a total field of 691 entries registering to the tournament. The INR 550 buy-in tournament had a prize pool of INR 5 lakh and at the end of the tournament, the top 55 players were paid out a minimum cash prize of INR 2,450.

Emerging victorious from this field was Sumit Silwal aka ‘pleasedontbet’, who took home INR 97,000 from the prize pool, along with an INR 30,000 package trip to Goa, where he can play live poker and try to multiply his winnings. He beat ‘Good man’ in heads-up, who also received a decent pay-out of INR 61,500 for finishing second.

The tournament ended in Level #9, with the blinds at 17,500/35,000 – 3,500, 5 hours and 1 minute after it began. Silwal had a chip lead of 10:1 over his opponent, and he went all-in with Kd Ts, which was called by Good man, who had pocket Queens. 2h Qc Ac on the flop gave Good man a set of Queens, putting him way ahead. 5d on the turn was inconsequential, but the Jc on the river gave Silwal a straight, winning him the Big Daddy title.

Gutshot caught up with Silwal after this win, a 32-year poker player from Jammu. He’s an MBA Graduate from IIM Calcutta, who moved to Delhi to pursue a cricketing career after his 12th. Unfortunately, his career in cricket didn’t materialize into something fruitful, but he had no regrets. When in Kolkata for his MBA, he started playing online poker on PokerStars. “Honestly speaking, I am a recreational player who doesn’t study the game at all and just plays on my instincts and common sense,” he said about his game currently.

Talking about his journey through yesterday’s Big Daddy, he said, “It was a regular Sunday evening. I had regged a couple of events. One thing led to another and before I realized, I was in the money. That is when I started playing a little bit cautiously. I made just one decision that helped me, at least that’s what I think. I made it a point that no matter what, I will not play against a raise of a bigger stack than me and even if I do, I will be ready to fold on any aggression, unless I have the nuts. A little early in the tournament, came my first big hand to get the stack going. I think there were 3 or 4 all in before me; I was last to act and called with 89 suited anyway and got more than triple up.”

“Continue to be a fish in online poker and play recreationally,” he said on a parting note, indicating that he has no intentions of taking up the game professionally in the near future. Keep reading GutshotMagazine.com for more updates on the top poker tournaments in India and around the world.