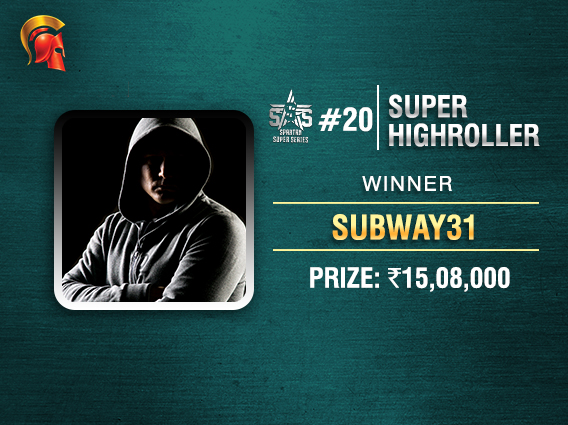 
The Spartan Super Series (SSS) is on in full swing and yesterday was Day 4 of the series, with six tournaments scheduled for the day. While there were a few lower buy-in events and also a featured tournament, the Super HighRoller was easily the biggest highlight of the day.

SSS Event #20 Super HighRoller INR 50 Lakh GTD kicked off at 9:30pm last night and it had an extremely steep buy-in of INR 55,000, which would indicate that only the best in the country would participate. This re-entry tournament saw a total field of 104 entries which beat the guarantee ever so slightly, creating a new prize pool of INR 52 lakh.

As per the calculations, only the top 10 places were paid out a minimum cash prize of INR 1.3 lakh, but the player to take home the biggest pay-check was ‘subway31’. Those who were following or playing in the tournament would know that subway31 was constantly in the lead or in the top few stacks, right from start to the end.

The player was deservingly awarded the top prize of the night, adding a whopping amount of INR 15,08,000 to his/her poker bankroll. Getting past a field which included some of India’s best players is never easy, but this player did that as the tournament eventually came to an end at 6:07am this morning.

He beat ‘profishnall’ in heads-up and although this player missed the big pay-jump, he/she would still be mighty please with the INR 9,69,800 prize for finishing second. In 3rd place was none other than Arjanveer Singh Chadha aka ‘instrumental’ who busted right at the start and fired his second bullet immediately. His second attempt was much more fruitful, adding INR 7,15,000 to his bankroll.

Another top player on the FT was Anirban Das aka ‘pokernoob’. He won INR 4.03 lakh for finishing 5th and he also won SSS Event #21 on the same night. Sumit Sapra aka ‘mrgr33n’ was the unlucky bubble boy in the SHR. Keep reading GutshotMagazine.com for more updates on India’s top poker tournaments.