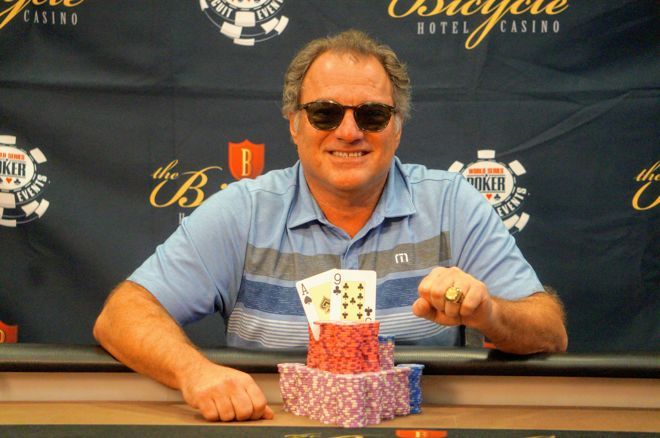 
After its stop at Harrah’s Cherokee Casino in the beautiful Smoky Mountains region of North Carolina, where Jake Bazeley won the Main Event, the World Series of Poker Circuit (WSOPC) moved on to the iconic Bicycle Casino in Los Angeles, starting from 1st December and running till 12th.

The WSOPC Bicycle Casino $1,700 Main Event attracted a total of 547 entries, making the prize pool of $929,900 (~INR 6.68 Crores). The champion to be crowned on the final day, Dec 14, of the event was 58-year old Southern Californian resident and entrepreneur Steven Spunt. He won $174,055 (~INR 1.25 Crores) as 1st place cash prize, a staggering 53% of the prize pool and his second gold ring. He also won a seat into the 2019 Global Casino Championship, which is an exclusive, invitation-only tournament.

Spunt, talking about his life and career, said “I play these for fun and I realized that most of the time, I’m just going to be happy. Except now. Now, I’m very happy.” Talking about the play in this tournament, he added, “I had a real good run to start. I had a bad beat, but then I had a real big run. I chipped up really well. I had limited experience heads-up. He’s a tough player, so I needed some luck and I got some luck.”  Spunt had also previously bagged a closed-event ring, winning a 2016 Seniors event at Bally’s Casino in Las Vegas.

On the Final Table, Spunt delivered his first knock-out of the table to Jason Bral. Spunt called Bral’s three-bet, with his Eight-seven against Bral’s pocket Fours. The river came to eight and it was over for Bral, who took home $58,405 for his fourth-place finish.

The runner-up David Lambard busted Steven Forman in 3rd place, preparing for the heads-up. Not so long into the heads-up, Spunt doubled big by shoving it in with middle pair and a gutshot draw against top pair. The board gave Spunt his gutshot and made him the leader.

In the final hand of the tournament, Lambard went all in and Spunt called. The flop of 7s 6s 9s gave Spunt a flush draw, his hole cards being As 9c against Lambard’s Ks Kh. He got his spade card when with the turn Js. The 10c river was insignificant and Lambard had to settle for 2nd place cash prize of $107,640.

Spunt cheerfully wore the ring and said, “I play for fun. I really enjoy the game. Part of my retirement plan is to play more just because I like it. It’s something to do. Hopefully, I’ll semi-retire and play a lot more tournaments.”