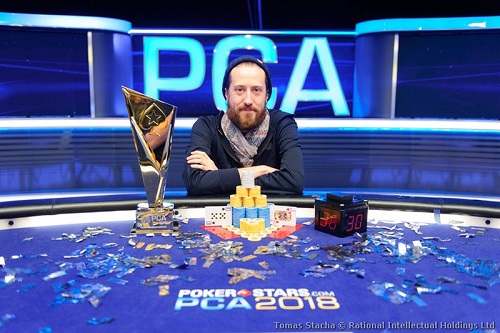 The 35-year old American pro has been around the live poker circuit for over a decade now, and it took him just 9 days into the New Year to secure his first big title. Beating a field of 46 entries to win this title, O’Dwyer registered his ninth biggest live poker win and he has reached the top ten all-time earnings list for the first time in his career. His career earnings have now crossed $21 million.

This is now the second time O’Dwyer has won this particular event in its 3-year history. “I had a few good years here in the Bahamas. No complaints, it’s fun to win,” O’Dwyer said after this victory. Poker Hall of Fame member Erik Seidel also reached the final table but was eliminated in fourth place.

Byron Kaverman was the chip leader coming into the final table and he went into heads up against O’Dwyer as the chip leader as well. However, O’Dwyer managed to string together 5 consecutive winning hands that put him in the lead and left Kaverman very short on chips.

In the final hand, Kaverman moved all-in pre-flop, holding Q-9 and O’Dwyer decided to make the call holding J-10. The board then opened J-4-2-5-K which provided no assistance to Kaverman and allowed O’Dwyer a J-pair which gave him the title and the massive prize money of $769,500 for first place.

For all similar poker news and updates from the PokerStars Caribbean Adventure, keep following GutshotMagazine.com!