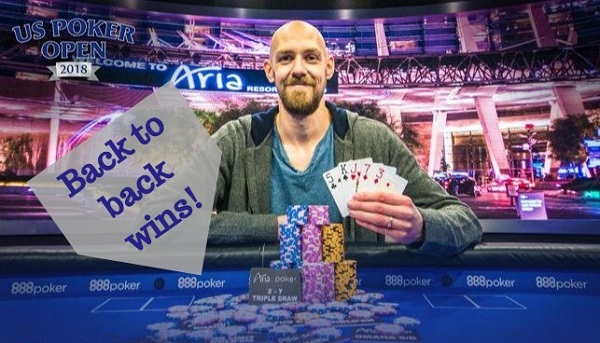 
It wasn’t too long ago that we reported the news of Stephen Chidwick coming from behind to win Event #3 of the 2018 US Poker Open, even though he started the final table with the third lowest chip stack. He faced off against famous poker pros like Keith Tilston and Daniel Negreanu and still ended up victorious, winning $374,000 for first place.

That win took him to the top of the list of total money grossed at the 2018 USPO and made him a favourite to take home the inaugural USPO cup. Well guess what? This poker player from England has gone on to register back-to-back wins at the US Poker Open, shipping Event #4 as well.

Event #4 was the $25k Mixed Game Championship and Chidwick emerged as the winner once again, beating pros like Phil Hellmuth, Daniel Negreanu and Isaac Haxton on the final table, to secure the top prize for a handsome sum of $382,500. He has taken a huge lead on the championship standings and everyone will be chasing him as they move into the second half of the USPO.

Chidwick has now taken his career live winnings to over $10.8 million and seeing that he is on a hot streak, we expect him to increase these earnings over the next 4 events. “I’m just running on caffeine and adrenaline right now. I’m pretty happy how I played today,” said Chidwick after this second consecutive win.

He beat a total of 45 entries in the mixed game event and considering he came off a win just the previous day, you can imagine how great an effort it has been from him. Day 1 of the mixed game event was a 13-hour grind and he came back from having a short stack on the final table, much like he did in Event #3. 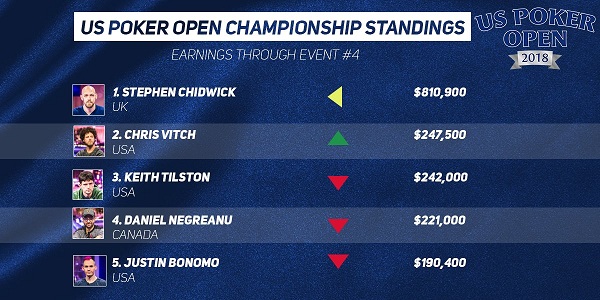 For roundups on all the remaining four events of the 2018 US Poker Open, keep following GutshotMagazine.com!