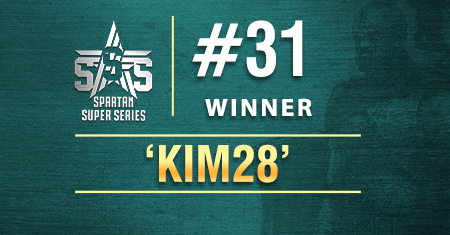 
Day 6 at the Spartan Super Series was about repeat winners. It started with Siddarth ‘PeterPunter’ Singhvi winning his third SSS title of the series and the end of this day’s action almost saw yet another repeat winner but he was foiled as ‘KIM28’ went on to claim the final SSS Event of Day 6 taking place at The Spartan Poker.

This particular tournament was slightly different from the previous tournaments of the day in that it followed a Progressive Knockout (PKO) format. The premise of the PKO is simple – a percentage of every knockout bounty is added to the bounty of the player who caused the knockout there by making it ever increasing so typically knocking out a player in the late stages could mean a nice little bonus depending on the number of players they’ve knocked earlier.

Players had to put up a buy-in of 770 to take part and from the 130 participating entries, 18 places would get paid out with the min-cash being INR 2,400. Gladiator007 was the unfortunate bubble boy of the event getting busted in 19th place. Familiar names like ‘effuno’ and Vivek ‘Pokerbatman27’ Rughani ran deep to make it to the final table but they would bust out in 5th and 7th place respectively. After ’emoboy’s’ elimination in 3rd place, it was down to KIM28 and his battle with Prabakar ‘Comandante’ Che. Che, our readers will remember, won Event #3 on Day 1 of this SSS series and was looking to grab his second title of the series.

KIM28 (225,119 in chips) was in the lead against Comandante’s stack of 164,881 chips. The latter dropped below the 100k mark in a matter of 7 hands and it was then left to a pre-flop all-in to try and double up and present a challenge to the chip leader. KIM28 (8c Ts) having the chip advantage called the all-in of Comandante (Ah 4s). Despite leading pre-flop, the river gods played spoilsport on a board of 3c 7h 5d Jh 9h which gave KIM28 the win courtesy a straight. A bit of a disappointment for Che who would have hope to score his second title but he would have to be content with his second place prize of INR 25,575 while KIM28 made off with the title and first place of INR 38,625.

And that was it for coverage from the penultimate day of the Spartan Super Series at The Spartan Poker. Final day at the SSS is already underway with the SSS Main Event all set to begin just a few short hours from now. Stay tuned to GutshotMagazine.com for updates from Day 7 tomorrow!