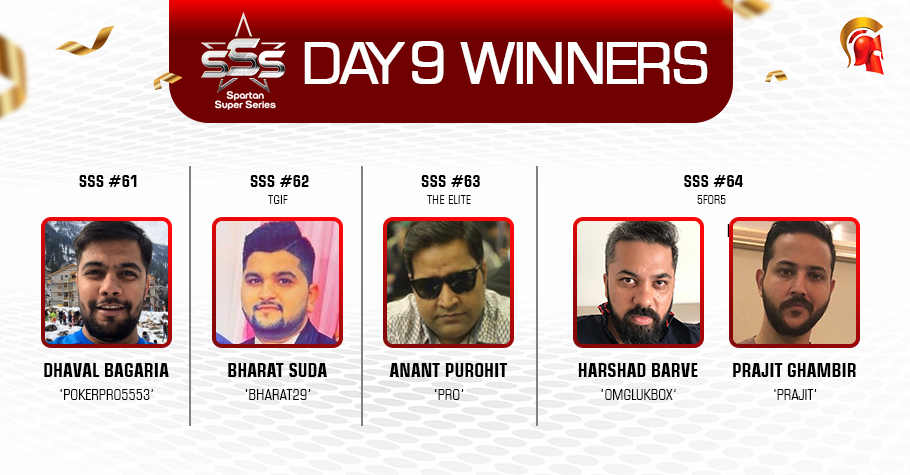 
The exciting Spartan Super Series (SSS) on Spartan Poker is reaching its end. The entire month has been quite exciting with SSS on the schedule. Last night along hosted seven tournaments out of which the two of the biggest attractions were Friday feature tourneys TGIF and The Elite. And here is a complete summary of SSS Day 9…

The day started with the first tournament attracting a field of 395 entries after each one paid INR 550. Out of this number only the top 31 finishers earned a share from the prize pool. It was ‘VR4Poker’ to top the list after the players settled for a 3-way deal and bagged the winner’s title along with the prize money while his opponent ‘SharkAAl’ settled in the second position.

Anonymous player ‘prana’ rode past the field of 349 entries to take down the Afternoon Showdown yesterday. The event saw each player chipping in INR 2,200 with only top 31 finishers returning home after securing at least INR 7,040 as min-cash. The event halted in level 43 and with ‘prana’ carrying the largest stack of 2.49L chips clinched added a valuable title to his poker CV.

The third tournament of the day pulled out a total of 448 runners after each paid INR 1,100. The top 39 players walked out with a min-cash of INR 4,140 and the one to top the list and claim the winner’s title was ‘pokersultan’ after the players settled for a heads-up deal and ‘ConMan’ secured the runner-up position.

Dhaval Bagaria aka ‘Pokerpro5553’ took down the event after riding past a field of 298 entries. The prize pool was well-received by the top 23 finishers. Bagaria claimed the top prize after the players settled for a 4-way deal which ultimately saw Aditya Wadhwani aka ‘adiwankenobi’ in the second position.

Spartan Poker’s Friday feature kick-started at 8 pm attracting a giant field of 1,204 entrants who paid INR 1,650 as buy-in amount. This brought the tournament prize pool to INR 18.06 Lakhs and the top 103 places benefited from the same. Riding past the field was Bharat Suda aka ‘bharat29’ who championed the event while his opponent Kunal Patni aka ‘TiltAtma’ settled in the runner-up position.

The popular Friday flagship tourney on Spartan Poker fetched 550 runners. Each entry paid INR 11,000 buy-in, crushing the guarantee to create INR 55 Lakhs in prize pool. The final number reached the top 31 finishers who walked out securing a min-cash of INR 29,950. Bagging his third title was circuit popular Anant Purohit aka ‘Pro’ who already took down Spartan Destiny Jr on Wednesday and PokerStars’ Highroller. Purohit eliminated ‘haayegarmi’ in heads-up last night and clinched to the 7-figure score!

The final tournament of the day promised INR 50k to top 5 players. Attracting a total of 386 entries who entered paying INR 1,100 only to generate a prize pool out of which 25 top finishers could earn a share. Topping the list was ‘Vishal Maharaj’ (1st) followed by ‘KidChaos24’ (2nd), Harshad Barve aka ‘omglukbox’ (3rd), ‘WALAO’ (4th) and Prajit Ghambir aka ‘Prajit’ (5th).