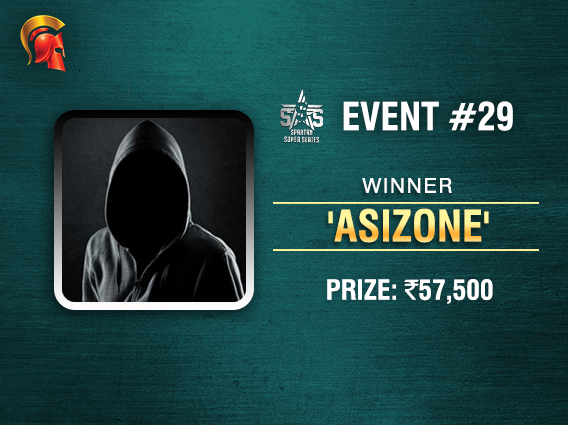 
Just one more day of action remains at the Spartan Super Series (SSS) and players are doing everything they can to try and score those valuable SSS leaderboard points. The Leaderboard carries a total prize of 10 Lakhs and 4 Lakhs from that goes to the topper, so extra incentive to do well across all tournaments of this series taking place at The Spartan Poker. One more winner was crowned in yesterday’s Event #29 and it was ‘asizone’ who claimed the top spot in this tourney.

A prizepool guarantee of INR 2.5 Lakhs was on offer for players who had to pony up a buy-in of INR 660 in order to participate. 173 entries took part from which 24 players got paid out. All of these ITM players would take home at least INR 2,500 for their efforts but of course everyone’s gaze was locked in on the top three spots which offered the most juicy payouts. Quite a few familiar names in the top finishers. There was ‘chalhatbe’ who took 4th place for INR 20,625 while Bhanu Prakash a.k.a ‘spectre’ took the second runner-up spot for a payday of INR 26,250.

Heads-up took place between asizone and ‘ForAyushi’. The latter had already taken down the DareDevil title earlier in the evening and was looking to make it 2-for-2 with his deep run in this tournament. spectre’s exit from the tournament courtesy asizone’s Ace high flush took the latter’s chip stack to over a million chips and ForAyushi’s stood at 640k. However it was all over in a matter of just a few hands. ForAyushi holding Ts Ac raised preflop and got a call from asizone (Kc Jd) to see a flop of Js 4d Th.

Both players hit a pair with asizone hitting bigger than his opponent and on that flop all the chips went in. 6s and 6h on the remaining streets did not change things and asizone took down the tournament win in that hand. He earned a prize of INR 57,500 for the win while ForAyushi would have to console himself for missing out on another title with a payday of INR 38,625.

Poker stories from India and around the world right here at GutshotMagazine.com!