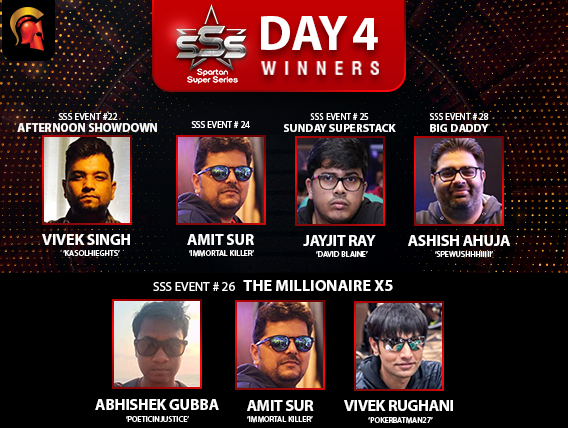 
Counted among the leading online poker platforms in the country, Spartan Poker is hosting the most exciting series of the month, the Spartan Super Series (SSS) INR 11+ Cr GTD. Scheduled to host 7 tournaments each day, the thrilling multi-flight Millionaire X5 was also a part. And here is a list of winners of SSS Day 4 along with top 5 finishers attaching the Millionaire title to their poker CV…

The first tournament of SSS Day 4 was triumphed by circuit popular Vivek Singh playing under the username ‘KasolHeights’. Singh outlasted a field of 430 entries and grabbed the largest share of the INR 8.60 Lakhs in prize pool. It was Kunal Sharma aka ‘cvc’ who settled in the runner-up position after failing to dominate Singh with his pair of Aces over his AATT.

A total of 591 entries joined the field after paying INR 1,100 out of which only the top 55 places could earn INR 2,940 as the min-cash. Powering through the field was ‘Setherson8’ who claimed the first-place prize money after the players settled for a three-way deal which eventually saw ‘TheShowDown’ in the second position and ‘AllinPavBhaji’ in the third place.

With a buy-in of INR 1,100 once again, a total of 339 entries logged in to hunt for the first-place prize money. It was the IOPC leaderboard topper who won the lavish MG Hector Amit Sur aka ‘Immortal Killer’ who emerged victorious after eliminating Shardul Parthasarathi aka ‘F – Bomb’ in level 46 of the tournament, when his fullhouse remained undefeated by his opponents two pairs.

The Sunday feature on Spartan Poker, Sunday SuperStack was among the high value tourneys that took yesterday. The guarantee was crushed after a total of 1,137 runners joined the field out of which only top 111 could take home a share from the juicy prize pool of INR 56.85 Lakhs. Coming out on top was circuit grinder Jayjit Ray aka ‘David Blaine’ after the players struck a three-way deal which saw ‘ztc3’ in the runner-up position.

April edition’s Millionaire X5 was hosted yesterday and the top 5 places attached the prestigious Millionaire titles! One of the major attractions pulled out a total of 1,986 hopefuls to the multi-flight tournament that led to the creation of INR 99.30 Lakhs in prize pool and it was Day 1B chip leader Abhishek Gubba aka ‘PoeticInjustice’ to ride past the field and capture the first place! He was followed by ‘FunkeyFox’ (2nd), Amit Sur aka ‘Immortal Killer’ (3rd), Vivek Rughani aka ‘Pokerbatman27’ (4th), and ‘Yennnefer’ (5th).

Another attraction was event 27 which saw 519 entries pouncing to capture the top prize that only belonged to the ‘royalking111’ who rode past the field to seize the winner’s title along with the cash prize after defeating ‘PokerStar090’ in heads-up which his QQ over his opponent’s high card Ace. However, the top 47 finishers earned a paycheck, a share from the prize pool.

Catching the public attention on was SSS #28 Big Daddy INR 12 Lakhs GTD that started off at 11 pm, the last tournament of the day. A total of 650 runners registered themselves after paying INR 2,200 and this was enough to create a bigger prize pool of INR 13 Lakhs. Taking home the winner’s title was circuit popular Ashish Ahuja aka ‘Spewushhhiiiii’ who defeated Kunal Patni aka ‘TiltAtma’ aka in heads-up to grab the first-place prize money.