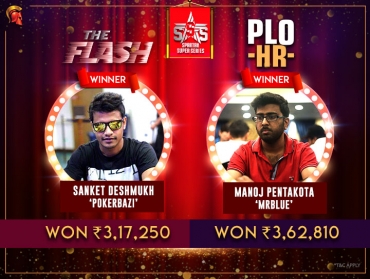 
Day 2 of the Spartan Super Series on TheSpartanPoker saw two big winners with the first Millionaire of the site Manoj ‘MRBLUE’ Pentakota shipping the Pot-Limit Omaha HighRoller event and Sanket ‘pokerbazi’ Deshmukh winning The Flash. The series also has the leaderboard worth INR 10,00,000 and after two days of the series, the tenth Destiny winner ‘dvaio’ is on top of the leaderboard with 4,206 points, then comes the SSS side event winner ‘lailaterilelegi’ with 2,939 points and in the third place it’s Deshmukh with 2,304 points.

The very first event of the day saw 489 participations where the event was shipped by ‘lailaterilelegi’ for INR 50,125. ‘lailaterilelegi’ defeated ‘rahool’ in the heads-up battle where ‘rahool’ collected INR 33,325 for the second-place finish. The prizepool was distributed to the top 39 places with a min-cash of INR 1,725.

The second tournament of the day drew 395 entries where the prizepool made by these entries was collected by the top 17 places with a min-cash of INR 6,280. Ludhiana based Mithil Nanda who plays under the moniker of ‘mithilnanda’ is running his own business, and he emerged victorious in the tournament.

He said, “My tournament experience was full of ups and downs. I was holding the top 5 positions for a majority of the tournament period and I had to play a very tight game. In my humble opinion, the tournament was primarily 15 key hands. 5 hands where I pulled off substantial bluffs. 5 hands where I successfully called an opponent’s bluff and 5 hands where I was lucky to out-flop my opponents. One of the toughest would be ‘AjaySK’. He played a tough game and we were neck to neck on the same table. I was lucky to win. Thanks.” Nanda took home INR 1,00,640 for the first-place finish.

The next event was a freezeout event. The event drew 180 entries and the prizepool collected was distributed to top 27 places with a min-cash of INR 3,000. At the end of the tournament, it was ‘D.Trump04’ who took down the title for INR 66,450. ‘D.Trump04’ outlasted Akash ‘Anarchytect1’ Shekhar in the final round of the tournament. Shekhar took home INR 44,850 for the second place finish.

Sanket ‘pokerbazi’ Deshmukh outlasted 296 entries in this featured tournament of SSS to claim the title and the first-place prize of INR 3,17,250. 25-year old Deshmukh is a dropout from an interior designing college, his mother is a sports teacher and father is a government officer. Born and brought up in Pune, Deshmukh expressed his poker journey to us, saying, “As usual even I have started enjoying poker from Facebook. But slowly this game gave me so much fun and enthusiasm by which I entered playing live cash games small stakes in the start. But 1st day of that I still remember I was the big fish in the pond. Now it’s been 7 years that I am playing poker throughout but was not able to achieve anything. I have some of my friends who help me out always in improving the game. Hope I do it better throughout the year. Good Luck. Cheers.”

He also shared some key hands from the tournament. “The game started when the bubble was near and as usual I was on 12 to 15 BBS. I was totally playing tight till I didn’t achieve the ITM. After I was totally on card rush till the final table was not over.”

The last event of the day was the Pot-Limit HighRoller event which was claimed by none other than the first Millionaire winner on TheSpartanPoker and that’s Manoj ‘MRBLUE’ Pentakota for INR 3,62,810. Pentakota defeated Neeraj ‘slowplayaces’ Kumar who is also an SSS big event winner. Kumar collected INR 2,49,920 for the second-place finish.

Here is a quick look at SSS leaderboard: 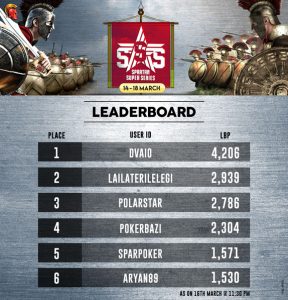