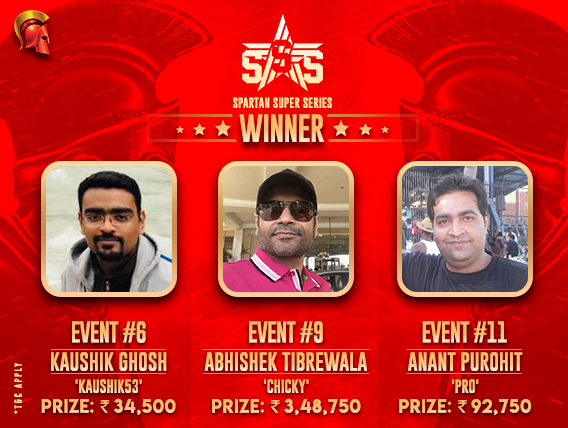 
Everyone’s favourite Spartan Super Series (SSS) returned on The Spartan Poker a couple of days back, with several high-value tournaments scheduled between 12-16 December 2018. Yesterday was Day 2 of the series and quite a few winners were crowned, apart from ‘randomiser’ winning the Super Highroller, which was the highlight event of the day.

A total of 6 events were held yesterday and here, we’re reporting the winners of these events which included Kaushik Ghosh, Abhishek Tibrewala, ‘moneymaniac’, ‘flopd8shit’ and Anant Purohit.

Here’s a summary of how things went down on SSS Day 2 on Spartan:

The day began with an INR 550 re-entry tournament that attracted a field of 170 players. From here, only 24 ended in the money with a minimum cash prize of INR 1,500. Emerging victorious from this field was Kaushik Ghosh who plays under the name ‘Kaushik53’, winning INR 34,500 from the prize pool. He beat ‘karimLala’ in heads-up after he completed a straight on the turn of the final hand, cracking his opponent’s pocket Aces.

Gutshot caught up with the winner and he had this to say about the victory – “SSS is a good series organised by The Spartan Poker – small buy-ins with good value. The FT in this tournament was hard fought and perseverance was the key. Kudos to all the participants. Thank you.”

The buy-in rose slightly to INR 660 for the second tournament of the day while the prize pool stayed the same. Here, only the top 15 from the field of 124 players ended in the money, with a minimum prize of INR 2,850 each. By the end of the tournament, it was ‘moneymaniac’ who emerged victorious, beating ‘fifagod’ in heads-up and taking away the top prize of INR 42,000. In the final hand, moneymaniac’s pocket Fours stood tall against his opponent’s Ac 8s in a pre-flop shove.

The buy-ins rose slightly as the day progressed, with entry to this tournament being INR 770. Here, a field of 133 players joined by the end of the registration period and from them, the top 18 were paid out a min-cash of INR 2,800. ‘flopd8shit’ turned out to be the eventual winner, bagging INR 45,063 after he beat ‘Screwdriver45’ in heads-up. Remember, Screwdriver45 already has two titles that he won on the first day and his consistency helped him maintain his lead on the SSS Leaderboard, where an additional INR 5 lakh is up for grabs in prizes.

This was the featured tournament of the day, replacing the usual Thursday night Flash tournament on The Spartan Poker. With a buy-in of INR 5,500, a total of 293 entries were a part of the competition, with 23 of them eventually finishing in the money with a minimum cash prize of INR 17,400. The field also included many pros like Rajat Sharma (18th), Aniket Waghmare (11th), Goonjan Mall (10th) and Anant Purohit (3rd). Purohit also shipped the final tournament of the day which helped him end Day 2 on #2 on the SSS Leaderboard.

The eventual winner of the tournament was Abhishek Tibrewala aka ‘chicky’ who beat Abhinav Iyer aka ‘Schumi91’ in heads-up. Tibrewala took away the biggest prize of INR 3,48,750 after his pocket Tens beat Iyer’s pocket Fives on a dry board after a pre-flop all-in in the final hand. When Gutshot contacted Tibrewala, he said, “Shipping a poker tournament is always a big high for sure. I’m very happy and I’m looking forward to a few more wins in this edition of the SSS.”

These tournaments are the ones that all of India’s top pros look forward too every time there’s a major series being held. It doesn’t allow participation from all kinds of players as the buy-ins involved are enormous. The tournament we’re talking about is the SHR which involved a whopping buy-in of INR 55,000. Last night, the winner was ‘randomiser’ who shipped the tournament for a whopping INR 15,08,000, beating a total field of 104 entries and making him the biggest winner of the series so far. The prizes pool was carried up to INR 52 lakh and in heads-up, randomiser beat ‘ElMatador’, who won a prize of slightly less than 10 lakh.

This was the final tournament of the night which kicked off at 9:30pm last night with a buy-in of INR 1,100. A field of 216 entries registered to the tournament and as the tournament progressed, only the top 30 from them were paid out with a min-cash of INR 2,450. The winner of this tournament turned out to be Anant Purohit aka ‘Pro’ who is a regular winner on Spartan. Here, he added INR 92,750 to his bankroll for shipping the tournament, outlasting ‘HaiTohHai’ in heads-up.

Gutshot contacted him about this victory and he said, “Finally an SSS tournament that I can put my name on. It was a quite interesting heads-up where I started with a 1:5 chip deficit against a good player. I somehow managed to win a few big pots and finally the tournament. Yesterday was a good day for me with 3 top five finishes in SSS including one win. Thanks to Spartan for hosting a series like SSS which gives all players a chance to win big from small investments. Looking forward to keeping up the pace.”