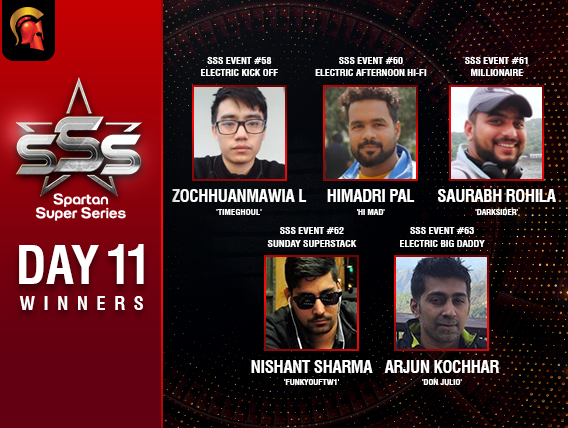 
The March edition’s Spartan Super Series (SSS) on Spartan Poker concluded yesterday. Wrapping up a total of 63 events that were spread across 11-days. The entire series assured INR 7+Crore pulling out the mid/high-stakes poker fanatics of the country. Following the shut down of workplaces and educational institutes throughout the country, the tournaments recorded a massive field surpassing the guarantee! The biggest event of the night was SSS Millionaire that assured INR 1 Crore GTD and here is a complete summary of SSS Day 11…

The first tournament of the final day commenced at 12 pm attracting a total of 396 runners who paid INR 550 as buy-in. The guarantee was surpassed to become INR 1.63 Lakhs which was shared among the top 31 finishers taking home a share from the same. Coming out on top was Zochhuanmawia Lailung aka ‘Timeghoul’ who defeated Rishi Gupta aka ‘BollywoodNight’ in heads-up with his two pairs of Nine and Seven and Ace kicker to emerge victorious.

With a buy-in of INR 660, a total of 499 runners entered the field, collecting INR 2.99 Lakhs in prize pool. It was ‘Bet2Win’ who triumphed the field after knocking out ‘Smokijoejr’ in heads-up in level 43 of the tournament with his Flush over his opponent’s pair of Queens. Besides, the top 39 finishers ended up earning at least INR 2,065 as min-cash.

A total of 466 entries pounced on the field after chipping in INR 1,100 buy-in amount. Out of this number, the top 39 places locked a share from the bigger prize pool of INR 4.66 Lakhs but the one to take away the largest chunk was Himadri Pal aka ‘Hi mad’ who topped the field after defeating ‘Seiborg09’ in heads-up and added a valuable title to his poker CV.

Indeed, the SSS ended quite well with the major attraction being Millionaire INR 1 Crore GTD. Fetching a total of 1,256 entries for INR 11,000 which was enough to smash the advertised guarantee and create INR 1.25 Crores in prize pool. Outlasting Raman Gujral in level 53 of the tournament was Saurabh Rohila aka ‘darksider’ the latest Millionaire champ after flipping over his full house over his opponent’s two pairs of Jacks and Nines, thus, claiming a hefty prize money along with the prestigious title!

The Sunday popular event was a part of the SSS series on Spartan Poker and a total of 1,033 entries were enough to generate INR 51.65 Lakhs in prize pool. A popular name in the community, Nishant Sharma aka ‘FunkyouFTW1’ secured the first-place cash prize and the Sunday title after defeating ‘ErrorDetected’ in heads-up with his full house TTTKK over his opponent’s TTTJJ.

Arjun Kochhar once again rode past the field to claim the last and final title of SSS March edition. The incredible 11-day tournament series ended with Kochhar who has previously taken down SSS Event #50 on Day 9, went on yesterday to defeat the winner of the SSS Millionaire, Saurabh Rohila aka ‘darksider’ in heads-up with his pair of Aces and Ten kicker and seized the winners title!