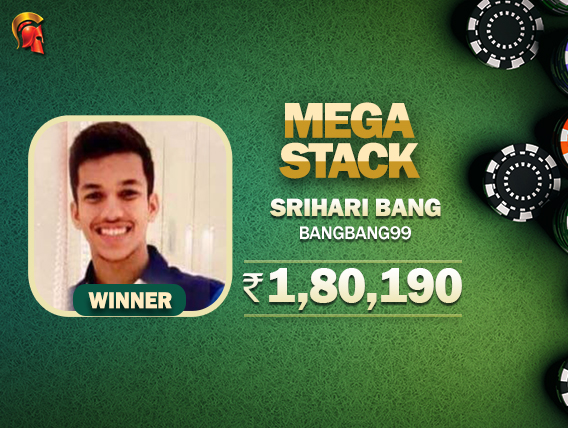 
This youngster is making a habit of winning on The Spartan Poker. For those who don’t know, Srihari Bang aka ‘bangbang99’ has been a regular part of final tables in Spartan featured tournaments over the last couple of months. Earlier playing under a different username, Bang shipped a couple of Spartan titles in July, including The Flash and an IOPC title.

Throughout August as well, he made deep runs, but his first major title of the month on Spartan came last night, where he shipped the Mega Stack tournament, beating a massive field of 410 entries and taking home the title, while also making another big addition of INR 1,80,190 to his poker bankroll.

Mega Stack INR 10 Lakh GTD kicked off yesterday evening at 7:30pm IST and the INR 3,300 buy-in tournament went on for 6 hours and 17 minutes before a winner could be crowned. It could have gone on for even longer, if not for a 3-way deal made between Bang, ‘DONKAKING’ and Pankaj Sharma aka ‘chalhatbe’, who has a few Spartan titles to his name as well.

The youngster was introduced to poker by his elder brother, Pranav Bang, and he seems to be really doing well in the game at the moment. In this particular tournament, the top 39 places were paid out a minimum cash of 8,487, but Bang had his eyes only on the top prize.

The guarantee of the tournament was beaten, with a new prize pool of INR 12.3 lakh being generated and at the time of the deal, all three players were almost equal in chips, which led to three nearly similar prizes, while Bang went on to win the title. DONKAKING went on to score INR 1,78,788 for second place and Sharma took away INR 1,71,521 for third place. ‘equity_hunter’ finished in 6th, another player who has won a few titles in the past.

Gutshot caught up with the winner to ask him about the experience. He said, “Megastack has always been one of my favourite tournaments and shipping it feels great. I’m thankful to myself for rejecting the deal when I was 4/4. The one hand which played a crucial role was shoving TT and being called by 22, it helped me build a good stack in 3-way. It has been a great 2 months for my poker journey from shipping The Flash, an IOPC event, finishing my dream run in MILLI for 4th and now this. I’m thankful to poker gods for being with me and especially to my brother Pranav for always helping me analyse my game.”

Keep reading GutshotMagazine.com for similar updates on Spartan featured tournaments. The next update will be on the first tournament of Destiny 6.0, which begins tonight at 7:30pm.