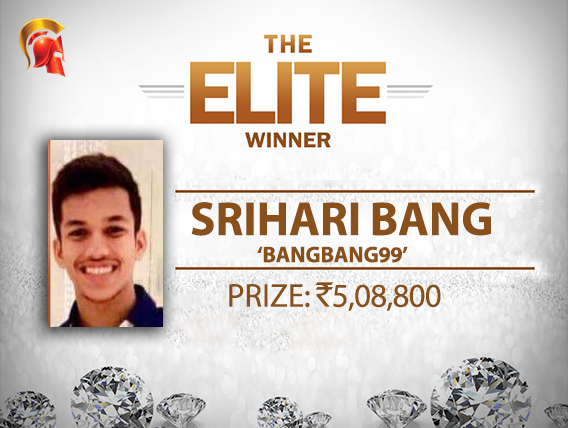 
One of the most popular online tournaments among the Indian poker sites is Friday’s The Elite at The Spartan Poker. Featuring a massive INR 15 Lakhs as a guaranteed prizepool, there is plenty of participation in this tourney. Last night’s Elite saw online reg Srihari Bang a.k.a ‘bangbang99’ ship the Elite title which make it his second big title this week having also claimed the Mega Stack tournament just a few days ago.

212 players came together and absolutely crushed the original guarantee making it a prizepool of INR 21.2 Lakhs. 20 players cashed out with INR 28,408 being the minimum cash assured to the money finishers. A few familiar names and past title winners in ‘omgrachelgreen’ and ‘Exit the Matrix’ once again ran deep and made the money but could not crack into the top 10. Another player Goonjan ‘gmtesting’ Mall, who in fact won the Elite just two weeks ago too missed out the final table finishing in 11th place for an INR 42,400 payday. When the tournament field eventually came down to 3-way action, it was bangbang99 going up against yesterday’s Little Big Series Mini Biggie runner-up Siddhant ‘bullzeye’ Kapoor and ‘helkul’ who our readers will remember won the first edition of the Destiny 6.0 series which offers players a chance to win a 10 Lakhs package to a premier European poker event!

bangbang99 was leading the counts and bullzeye was the short stack. Three-handed action went on for a significantly long time and finally it was bangbang99 who eliminated bullzeye when he hit a full house against the set of bullzeye. But that hand was still not good enough to bridge the almost 2:1 gap between him and chipleader helkul. That shift happened in the very next hand though as a classic race took place between bangbang99 (Ah Kh) and helkul (Ts Td). It was looking good for helkul to make it his second win for the week the river played spolisport on a board of 9s 4c 4h 8d Ad. And with that the lead extended to 5:1 in bangbang99’s favour. Sure enough the chips went in a hand later once again in a race situation of 6h 6c against Jc Ac with bangbang99 holding the pocket pair. 9s 8s Ks Qh 6s providing yet another nice river card for Srihari Bang as he took down the title and INR 5,08,800 as first prize. For his runner-up finish, helkul took INR 3,45,560.

Stay tuned to GutshotMagazine.com as we bring you a round-up from the unique Triple Bubble tournament at The Spartan Poker.