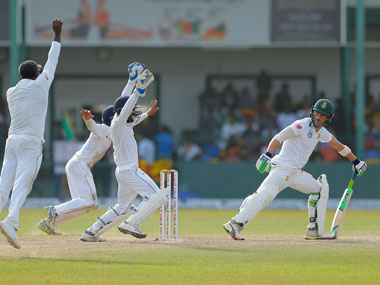 
It was a complete trial against spin for the South African team that just finished a 2-match test series against Sri Lanka in Sri Lanka. Just when one would say that Sri Lanka are one of the worst performing sides in international cricket at the moment, they complete a 2-0 whitewash against one of the best test teams.

The hosts won the 1st test by 278 runs and completed another emphatic victory in the 2nd test yesterday, winning by 199 runs. This was a test match that belonged completely to the spinners or maybe to just anyone who could come up to the crease and turn the cricket ball.

Just to emphasize this statement, let us tell you that 32 of the 35 wickets to fall in this game were claimed by spinners, with one wicket to Lungi Ngidi, one to Kagiso Rabada and one being a run out. Sri Lanka also decided to go in with an all-spin attack in this game, and it worked wonders for them.

South Africa on the other hand, were left clueless in this match and their only spinner was Keshav Maharaj, who walked away with career-best bowling figures and also career-best match figures. His 9/129 was only the 19th time in the history of test cricket that a bowler picked up a 9-wicket haul. He also grabbed match figures of 12/283.

While Maharaj had a good game, the visitors fell to a horrible defeat and this is only the beginning, with a 5-match ODI series and a single T20I still to be played. Another positive for them could be the fighting knock of 101 by Theunis de Bruyn, with none of the other South African batsmen able to get a good score.