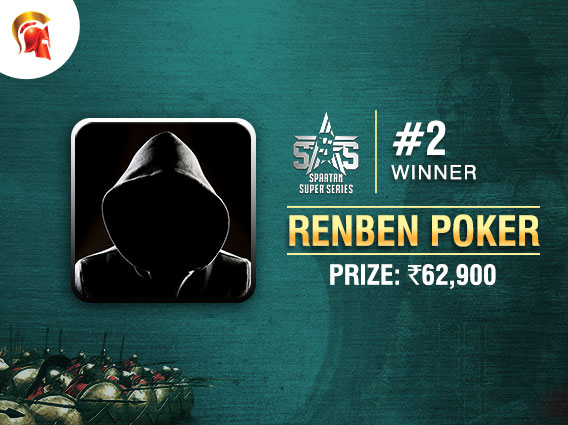 
There was excitement all across the country with the launch of the Spartan Super Series yesterday, scheduled between 13-19 August on The Spartan Poker. Over INR 3.7 crore is up for grabs in guaranteed prizes during this time and the series began in style with Mayur Mehta beating 163 entries and shipping the opening event.

The second tournament of the day was SSS Event #2 INR 2.5 Lakh GTD which kicked off at 4pm IST. The tournament featured a low buy-in of INR 500, which attracted a field of 466 entries. At the end of the tournament, the top 17 players were handed pay-outs, with a minimum cash prize of INR 3,925.

It you remember well, omgrachelgreen took down The Elite tournament on Spartan just around 10 days ago, claiming a prize in excess of INR 4 lakh. Here however, it was Renben Poker who claimed the title, but it wouldn’t have been an easy ride for him. He was awarded INR 62,900 for first place, while omgrachelgreen took home INR 42,500 for the runners-up prize. The player however, continued a hot run, shipping a tournament later in the day and going straight to the top of the SSS Leaderboard.

In the final hand, Renben Poker went all-in with pocket Fours before the flop opened, while his opponent made the call with Kd Jc. The board opened 7s 8s 3c 3d 7c, with two pairs – Sevens and Threes on the board itself. However, Renben Poker claimed the pot and the title, with Sevens and Fours.

It would’ve been a happy day for this player, who has won a title early in this edition of the SSS and will be aiming for a finish on the SSS Leaderboard as well, where INR 10 lakh is up for grabs. Keep reading GutshotMagazine.com for regular updates on what’s happening at the SSS series on Spartan.