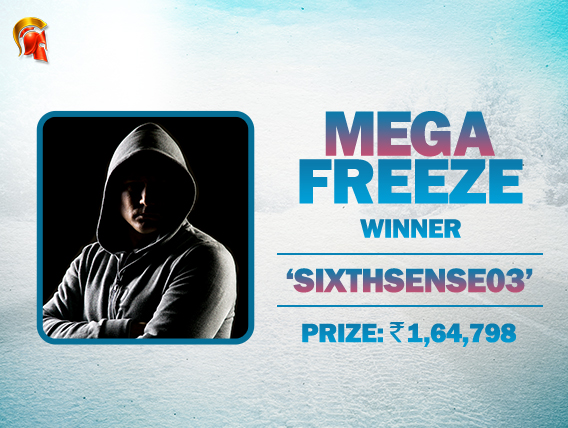 
Every Monday, The Spartan Poker hosts one of their featured tournaments known as the Mega Freeze. As the name suggests, the tournament is a freezeout tournament and it has a buy-in of INR 5,500 and an INR 5 lakh guaranteed prize pool. Yesterday however, the guarantee was crushed.

With the success of the recent India Online Poker Championship (IOPC), a lot of new players have been brought in, leading to 131 entries registering to the tournament and a new prize pool of INR 6.55 lakh being created. The tournament lasted just 4 hours and one minute before a winner was crowned.

The tournament was shipped by ‘SixthSense03’, who makes regular appearances on final tables on Spartan. The player seems to love the freezeout format, having also shipped this same tournament three weeks back for INR 1.3 lakh. This time, with a bigger prize pool, the player took home INR 1,64,798.

It was Level #28 of the tournament when the last hand was played. The blinds were running 2,400/4,800 – 600 and SixthSense03 had created a huge lead over his heads-up opponent, ‘buffalosoldier’. The latter saw a good opportunity to double up when he held pocket tens in the final hand.

He went all-in pre-flop and SixthSense03 made the call. The player would’ve been happy until SixthSense03 revealed pocket kings. He would’ve needed another 10 to open up if he wanted to stay in the tournament. However, the board opened 9c 8s 2c 3c 4h and SixthSense03 won the pot with a pair of Kings.

There were quite a few good players on the final table, including ‘RippingAA’ who won a couple of titles in the recent IOPC series and Anirban Das aka ‘pokernoob’, who finished 7th. Shravan Chhabria also finished 10th in the tournament for a prize of INR 13,427.

Keep reading GutshotMagazine.com for regular updates on the top Indian poker tournaments, both live and online.