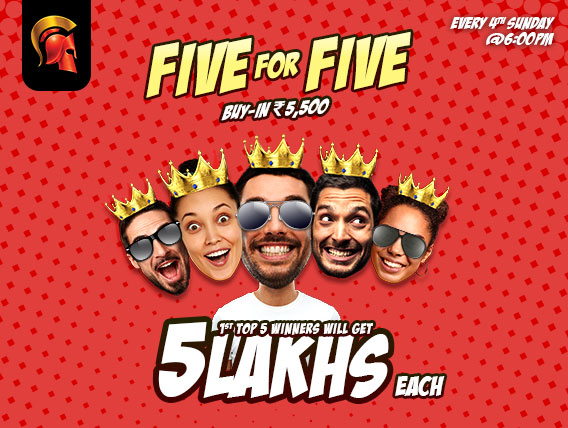 
The Spartan Poker is one company that always wants to reward its players with high-guarantee tournaments and big prizes for all. Research and innovation is their specialty, and they’ve now come out with an exciting new tournament offering called 5 for 5. The tournament will offer an incredible return on investment, like most of their other tournaments.

Just as the name suggests, it is 5 for 5. Here, the top 5 finishers in the tournament will be awarded a whopping INR 5 lakh GTD each. The tournament has been scheduled for the fourth Sunday of every month, giving everyone the chance to be a part of this amazing tournament offering. The buy-in is of INR 5,500 and here, players won’t be racing for the top finish, but for the top five!

The 2.o.K and The Millionaire are already two signature tournaments that take place on the first and second Sunday of each month. The 5 for 5 is now set to join these two signature tournaments on Spartan, where no matter how big or small the field, the top 5 players will each be guaranteed a prize of five lakh rupees. The first edition of this tournament will be played on 23rd September 2018. Good luck!

With an increasing userbase and ever-increasing successes in their major tournaments and series, Spartan has decided to bump up the guarantees of some of their most popular tournaments, giving players a chance to win even bigger, while their investments (buy-ins) stay the same. Take a look:

It has been a good last ten days of so for poker players on Spartan, with so many new products and promotions being launched. For the month of September, Spartan launched the following promotions, with bucket-loads of prizes to be won in each one:

Keep reading GutshotMagazine.com for more updates on the top poker promotions in the country.