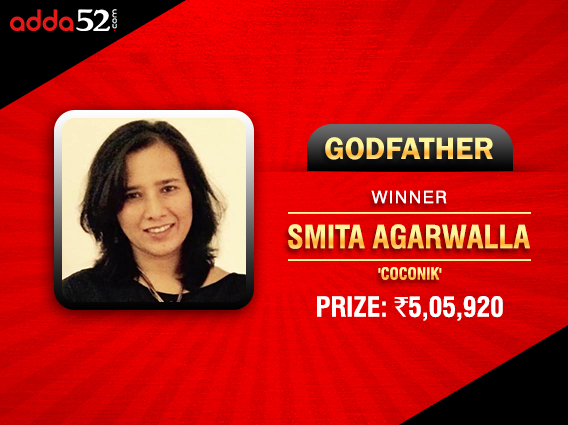 
Adda52 is one of the gems of the online poker industry in India, hosting plenty of high-stakes events all around the year. Their daily feature tournaments work like magnets, attracting a horde of poker players from across the country to enhance their skills at this game.

Last night saw yet another high value tournament on Adda52 come to a successful end. Thursday’s feature tournament, the Godfather 6.0, began at the usual 8 pm yesterday. At a buy-in of INR 5,500, the tournament attracted 408 total entries, including 176 re-entries. This is the 6th edition of Godfather series on Adda52, and the winners of nine consecutive Godfather tournaments will get to play in the Godfater 6.0 Finale SnG on 30th December. The winner to emerge from this will earn a whopping INR 7 Lakhs package trip to play at the 2019 Aussie Millions, which will be played on 15th January.

The winner to be crowned yesterday was Smita Agarwalla aka ‘coconik’. She took home a massive amount of INR 5,05,920 as first-place cash prize. With the online scene dominated by men, it’s highly welcomed news when a woman ships the tournament and that too for a staggering amount like this. We usually associate a man behind the word Godfather, but here’s Agarwalla bringing out some welcome change!

Gutshot recently conducted an interview with another respected woman player, Chandni Malik aka ‘Maidumji’, and she had this to say, “The field surely needs more women players to compete and win the big bucks.” Surely, we’ve found another woman player in Agarwalla now, who has had a few deep runs but this win would’ve been the icing on the cake for her.

Agarwalla beat ‘alwaysnutz’ to ship the title and the cash prize. Gutshot got in touch with the champion after her win, and she had this to say, “I love playing on Adda52 and the Godfather and Whale are two of my favourite tourneys here. I’ve managed to finish 2nd and 3rd and on the Final Table a few times on both tourneys, but shipping it was a dream. Godfather has a nice 8-max structure with INR 15K starting stack. The field was full of regulars and overall nice prize structure. Overall, a great tourney experience and even better since I managed to ship it.”