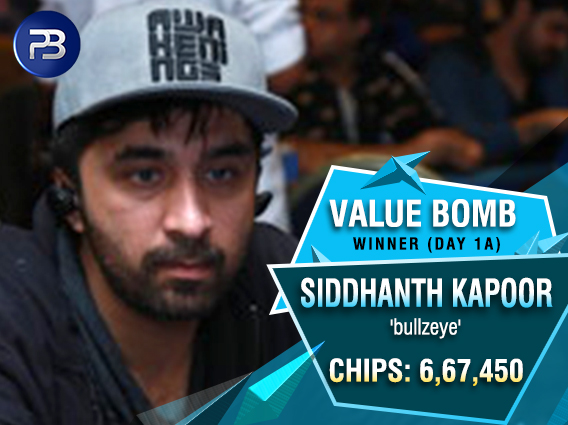 
PokerBaazi is known for introducing some of the highest value Indian online poker tournaments, and in the last few months, they have been continuously upping the game. Recently, they launched 1 Cr GTD Value Bomb, calling it India’s biggest high-value tournament. The tournament has a buy-in of just INR 2,500 and multiple flights.

Four starting flights were scheduled between 5-8 June, each starting at 7pm each evening. Yesterday was the first starting flight and we saw an outstanding response with 709 entries (including 210 re-entries) registering on flight 1A. The grind went on for 5 hours and after a specified number of levels, only 67 players bagged their chips to progress to Day 2.

Leading them was none other than Siddhanth Kapoor, who is a famous actor, entrepreneur, DJ and of course, poker player. He has a few victories on PokerBaazi in the past and this is one tournament he will be eyeing now too, progressing from 1A with a massive stack of 667,450 chips.

The last time that PokerBaazi hosted a multi-day tournament was February this year where they hosted Game Changer, which was a smashing success. The INR 2 Crore guarantee was crushed with a new guarantee of INR 3.77 Crore being generated, so we may very well see a similar outcome here.

Day 2 resumes on 9th June at 6pm but before we get there, there are three more starting flights to be played including Day 1B which starts today at 7pm. Stay tuned to GutshotMagazine.com for all timely updates on the Value Bomb.