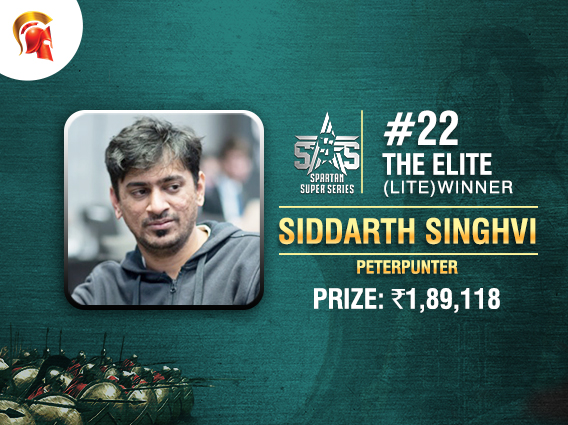 
The Spartan Super Series (SSS) moved into its fifth day yesterday and players are now seriously working towards winning titles and finishing in the top ten of the SSS points leaderboard. SSS Day 5 on The Spartan Poker kicked off with SSS Event #22 The Elite (Lite) INR 5 Lakh GTD at 2pm and once again, a huge participation was witnessed.

The tournament had a buy-in of INR 3,000 and a total field of 299 entries registered, smashing the guarantee and creating a new prize pool of INR 8,22,250. At the end of the tournament, this prize pool was shared among the top 24 players with a minimum cash prize of INR 8,223.

Siddarth Singhvi has been having a good time in poker of late and he was victorious in this tournament as well, playing under the username ‘PeterPunter’. He beat ‘ozzy’ in heads-up and took home a prize of INR 1,89,118, while his opponent won INR 1,27,038 for finishing second.

Singhvi is a regular online player, having won the Daredevil title on Spartan a couple of months ago, and also having shipped the famous 2.o.K title for INR 15 lakh. He has also been travelling in search of a good live score, recently spotted in action at the APPT Manila last week.

This particular SSS tournament came to an end in Level #52, when the blinds were running 17,500/35,000 – 3,500 and Singhvi having built a chip lead of over 3:1. In what became the final hand of the tournament, ozzy went all-in pre-flop with Ad 9h, which was called by Singhvi, who had Ah Tc. The board ran dry with 8s Kd 6h 2s Qh and both players had high card Ace, while Singhvi won the pot and title with a higher kicker, Ten.

Keep reading GutshotMagazine.com for timely updates on the SSS series.