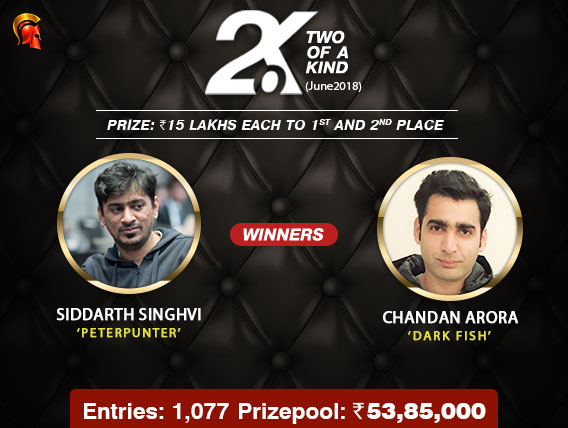 
What’s better than one? Two of course! And The Spartan Poker’s Two of a Kind (2.o.K) tournament promises exactly that. This INR 5,500 buy-in tournament offers a pretty huge prizepool every first Sunday of the month and not only that, this tournament ends when the final two players are left. And each of them is assured a sum of INR 15 Lakhs!

The two winners of the 2.o.K in question are Siddarth ‘PeterPunter’ Singhvi and Chandan ‘Dark fish’ Arora. Singhvi is one of those live and online regs who has been doing very well for himself both in live and online forms of the game. Another top 10 finisher in this edition of the 2.oK, Sumit ‘mrgr33n’ Sapra (10th place), was participating in this tournament while grinding at the APL series which was taking place this past week in Vietnam.

723 entries brought the prizepool to INR 53.85 Lakhs which was divvied up by the top 85 finishers. These 85 would be guaranteed a minimum sum of INR 8,077 for their efforts. But the juice is of course right on top and vying to finish in the top two spots were PeterPunter, Dark fish and ‘luckyidiot‘. The latter was the short stack with just over 2.8 million chips while Dark fish had 4.6 million and PeterPunter was the chip lead by far with 8.6 million.

The final hand had luckyidiot moving all in preflop with pocket Tens and was called by Dark fish who had pocket Nines. Heartbreak for luckyidiot on the river though as Dark fish spiked a much needed Nine to make a set and eliminate luckyidiot in 3rd place (INR 5,92,350). The remaining two players of course scored a payday of INR 15 Lakhs each for winning the 2.o.K.