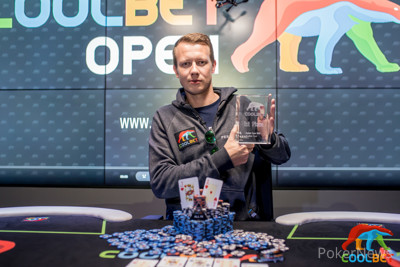 
Finland’s poker player Sebastian Wahl emerged victorious in the first ever Coolbet €550 Main Event at Olympic Park Casino and the Hilton Tallinn Park for €50,100. Wahl claimed the title. A Coolbet Open package valued at €1,200 for the next festival in Tallinn later this year was added to the prizepool going to all final table participants as well as a Las Vegas package for two valued at €5,000 added for the winner.

It’s Wahl’s biggest ever poker win and he celebrated the victory with friends and runner-up Sander van Wesemael, also known to many as “The Weasel” as a take on his last name. The 425 entrants generated a massive €206,125 prize pool. In addition, the festival featured 26 side-events to create an action packed 27 event schedule. This is not Wahl’s first win having claimed €21,923 for winning a €250 NLH event at the Raymond Poker Event in Helsinki in 2012.

The final hand went down in Level #28 with blinds running 40,000-80,000-10,000. Wahl had Ah Jh and his heads-up opponent Sander van Wesemael had 9d 9s. After a preflop raise by Wahl, his opponent 3-bet him and Wahl decided to turn on the pressure by raising enough to put his opponent all-in. With pocket Nines, the Weasel knew he was not going to get a better chance of doubling up and staying alive in headsup. But a Jack in the window 6h 5d Js knocked down his pocket pair. The turn Jd virtually sealed the deal and the river was an inconsequential 3h. Those trips on the turn gave first place prize and the title to Wahl while Wesemael finished runner-up in the tournament for €33,000.