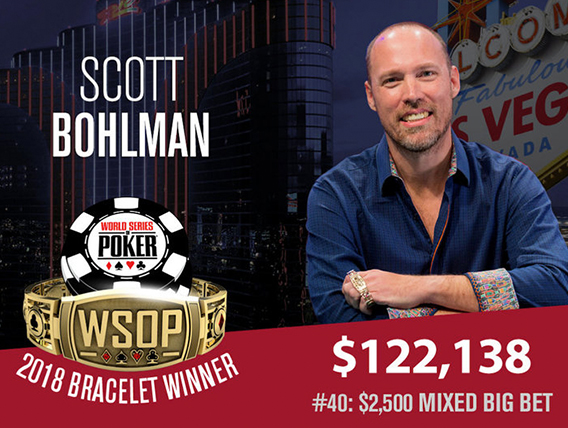 
Scott Bohlman, from Illinois in the United States, has taken down the win in Event #40 of the 2018 World Series of Poker, $2,500 Mixed Big Bet. The 41 year old who is an investor when not playing poker, arrived at Thursday’s final table with a commanding lead and closed out his first career WSOP victory in short order. Bohlman’s cruise to victory suffered only one hiccup, that during three-handed play when his final two opponents pulled close, only to see Bohlman quickly reestablish control.

Bohlman’s $122,138 winner’s payday was the largest of his WSOP career, and occurred in his 60th lifetime cash at the WSOP. The six-figure payday exceeds a $108,000 score he notched in the 2009 WSOP Main Event and swelled his lifetime earnings to $859,552. Bohlman’s bracelet win was completed with the ouster of two-time bracelet winner Ryan Hughes. Hughes, 37, of Phoenix, AZ, collected $75,477 while seeing his own lifetime WSOP earnings swell to just under one million dollars.

Third place in Event #40 was claimed by Atlanta, GA’s Daniel Weinman. The 30-year-old Weinman, a previous WSOP Circuit ring winner, earned $49,541 for the effort. Bohlman’s cruise to victory culminated with a knockout of Hughes during a hand of Big O, a variant of Omaha hi-lo eight-or-better in which players receive five hole cards instead of four.
The pro from the Chicago ‘burbs has been around for a few years, grinding away in several different tourney formats, though his favorites are mixed-games events. Bohlman also took himself off another list – that of the most cashes at the WSOP without a bracelet win. Bohlman entered this summer’s WSOP with 46 cashes, and had picked up another five before grabbing the gold in this event. (Bohlman also has eight WSOP Ciircuit cashes, for an overall WSOP grand total of 60).

Bohlman was tied for 17th on that no-bracelet win as the series began and had climbed a couple of spots higher. Yet now he’s off of it entirely. “Happy. Relieved,” was all he could muster about finally collecting a bracelet. This $2,500 Mixed Big Bet event, which debuted last year, drew 205 entrants to build a prize pool of $461,250. 31 players cashed, with a min-cash worth $3,777.