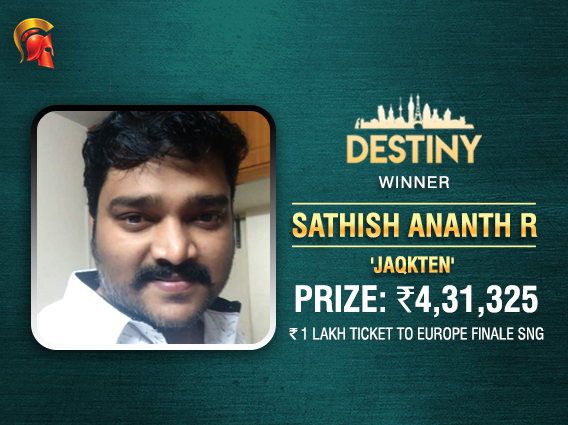 
After a long Destiny 6.0 series which eventually saw 10 players battling it out in the Europe Finale SnG, The Spartan Poker has immediately launched the seventh edition of this immensely popular tournament series. ‘Tiger10’ won that Finale and an INR 10 lakh package trip to Europe. Now, another winner will be crowned after another ten weeks from today.

The seventh edition kicked off last night and one Destiny tournament will be played every Wednesday night at 7:30pm for the next ten weeks. Once again, the ten winners will participate in the Finale to play for the massive INR 10 lakh package trip to play poker at a prestigious location in Europe.

Destiny 7.0 INR 20 Lakh GTD kicked off last night and the INR 5,500 entry fee tournament attracted exactly 400 entries to match the guarantee. The prize pool was eventually shared among the top 40 players with a minimum cash prize of INR 12,030 each, but the player to take away the biggest prize on the night was Sathish Ananth Raja aka ‘Jaqkten’.

It was a long grind of over 9 hours and this tournament usually sees the toughest fields from around the country. Eventually, however, Jaqkten took down the top prize of INR 5,31,325, from which INR 1 lakh will be deducted as a ticket towards the Europe Finale SnG.

Tons of known players finished in the money yesterday including Dhawal Lachhwani aka ‘Stick3rz’ who finished 5th. He narrowly missed a 6-figure cash after a brilliant outing in Rozvadov last week. Goonjan Mall aka ‘gmtesting’ and Deepak Bothra aka ‘chimpoo’ also finished in the top 15.

Gutshot caught up with Sathish after this victory. He said, “After several hiccups, I have started to believe that I too can be good at the tables if you could control your anxiety and take all decisions logically. Tournaments are growing far too attractive and you start to appreciate the excitement it could give like any other sport if you play it right. Never give up is my motto.”

Featured tournaments take place daily on The Spartan Poker and you can get updates on all these tournaments here on GutshotMagazine.com.