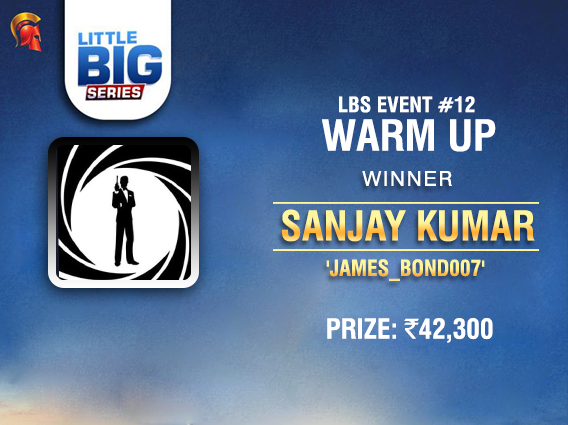 
Day 3 of the Little Big Series (LBS) at The Spartan Poker saw a fair amount of action and had a total of four events on schedule. The biggest of these was the final event of the day i.e. Event #12: Warm Up which was a 2 Lakhs guaranteed tournament. Sanjay Kumar a.k.a ‘james_bond007’ ended up being the victor of this tournament outlasting the field to take down the biggest prize of the night. Let’s take a look at the rest of the events of Day 3 before we come back to the Warm Up.

Action on the penultimate day of the LBS began at 2:00 pm the afternoon with this Rebuy+Addon tournament. 171 entries participated in the tournament out of which 24 places got paid out with an assured min-cash of INR 1,020. The eventual winner of this opening event was ‘Matt999’ who outlast ‘Neet07’ in an headsup battle that last over 30 minutes! Matt999 began as the lower stack at the start of headsup but managed to gain the lead and in the final hand, his pocket Nines were best against Neet07’s pocket Fours on a board of Qd Th Tc 7c Jh. For the win, Matt999 took home INR 13,800 while Neet07 got INR 9,270 for 2nd.

The second event of the day was a Re-entry format which saw 215 participating entries. 27 players got paid out with INR 720 being the min-cash in this INR 220 buy-in tourney. The final two players battling it out for the title were ‘shubhamgupta140494’ and ‘PantherPaw’. The former held the lead with a little over a million chips against the 700k stack of his opponent. PantherPaw took over a slight lead but in two hands lost it all. The first one really crippled his stack when his Ace Jack ran into the bullets (Ah Ac) of shubhamgupta140494. The very next hand was the end of the tournament when a turned set of Deuces knocked out PantherPaw giving him INR 11,920 for runner-up and INR 17,600 went the way of the winner shubhamgupta140494.

The second to last event of the day was the only freezeout tournament on Day 3’s schedule. 171 players ponied up the buy-in to get in on the action of this tournament. ‘Kshark9953’ (7c Jc), ‘Marshallwow’ (Ts Th) and ‘kumarsh’ (Qd Qh) were involved in an exciting 3-way clash which resulted in a double knockout in the final hand. kumarsh holding a substantial lead and a good hand raised it up which got repopped all-in by Marshallwow with his Tens and seeing an opportunity to try and triple up his short stack Kshark9953 also moved in with his suited cards. A Queen in the window for the chipleader on a board 9h Qc 5s 7s Tc and with the three Ladies, he knocked out the other two players for the win (INR 13,800) and his second title in this LBS series.

The big ticket tournament of the day was the INR 660 Warm Up which promised a prizepool of INR 2 Lakhs to players. 2017 entries came together of 31 got paid out with min-cash being INR 1,760. In headsup, Sanjay ‘james_bond007’ Kumar, holding a slight chip lead went up against ‘grind121’. There were quite a few pots which went back and forth, “grind121 kept going all-in frequently and so I was more careful to remain patient and not lose my cool”, said the 45 year old Kumar. That patience paid off eventually when grind121 (5h As) decided to move all-in preflop once again but this time james_bond007 (8s 8h) had the goods to make the call. No help for grind121 on the board of Jh Jd Tc Js 2d which gave a full house of Jacks full of Eights to the eventual winner who took home INR 42,300 for victory.

Gutshot spoke to the winner who is from Nawada, Bihar but is currently based in the Garden city of Bengaluru. “On the final table, a key hand was when I went up against ‘welfare1’ (Ac 9c) who reraised me all-in after I made a preflop raise with my Queens (Qd Qs). He didn’t hit anything on the board 8s 7c 8c 8d 4h and that was an 800k pot which gave me a good lead on the FT.” Kumar is a not a pro player but chooses to play poker occasionally as a source of mental relaxation and fun, “No plans regarding poker as playing this game is a break for me which I indulge in once in a while.”

Come back again tomorrow to GutshotMagazine.com as we will bring you coverage from the final day’s action at the Little Big Series including the winner of the LBS 10 Lakhs GTD Main Event!