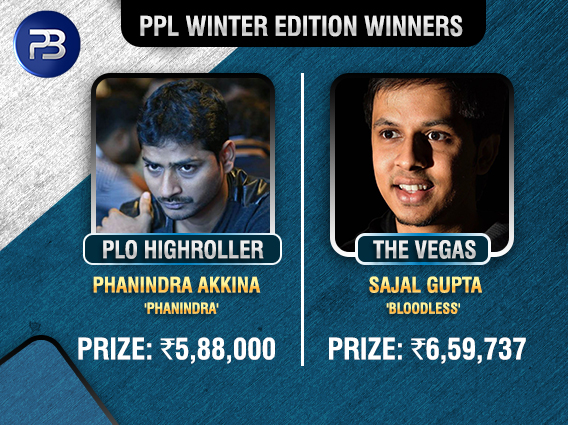 
As a poker company, what more do you want when all your tournament guarantees are being passed and all your players are satisfied? PokerBaazi right now is in that situation where currently, they are hosting the PokerBaazi Premier League (PPL) Winter Edition and after three days of action, all guarantees have been passed.

Yesterday was PPL Day 3 and another five tournaments were hosted through the day, with a number of new winners emerging, the biggest being Sajal Gupta and Phanindra Akkina. Side events were also contested and those who emerged victorious there were Abhishek Garg, ‘rahuljohn1983’ and Akhilesh Singh.

The first tournament of PPL Day 3 saw a buy-in of INR 1,100 and a total of 383 entries (including 194 re-entries) signed up to elevate the prize pool to INR 3.83 lakh. Abhishek Garg aka ‘abhi3333’ has been having a good time on PokerBaazi in recent times, having won The Summit on their platform just last month. Now, he shipped PPL #11, beating ‘Manisingh’ in heads-up to secure the top prize of INR 76,600.

The next to kick off was a tournament in the most preferred 6-Max format, where 550 entries decided to take part to inflate the prize pool to INR 6.87 Lakh. Eventually, only the top 39 players finished in the money of this INR 1,375 buy-in event, with ‘rahuljohn1983’ coming out on top of the field. He was the only one to walk away with a 6-figure cash in this tournament, winning INR 1,32,343 in prize money after beating ‘himanshu.zak’ in heads-up.

Gutshot caught up with Akkina after he added another big title to his trophy cabinet. Talking about this win, he said, “It was a good experience, and my first PLO tournament victory. It was quite swingy and I came back from a 10:1 chip disadvantage at one point in heads-up, so it was a very satisfying win. Now, I’m looking forward to all the major tournaments in this edition of PPL.”

For all you PokerBaazi regulars, you would know that The Vegas is one of their featured tournaments, the guarantee of which was bumped up only for the PPL Winter Edition. Here, a buy-in of INR 5,500 was involved which attracted a 723-entry field and created a new prize pool of INR 36.15 lakh. Emerging victorious from this packed field was Sajal Gupta aka ‘Bloodless’ who has had quite a few online victories in the past. The player added a massive amount of INR 6,59,737 to his poker bankroll for winning the tournament and beating ‘thepokerraja’ in heads-up, with the latter winning INR 4.88 lakh for finishing second.

Gutshot caught up with Gupta to congratulate him and ask him about the tournament experience last night. He said, “I’m really glad to ship an event on PokerBaazi after a lot of close calls lately. PPL is an amazing series with great guarantees, so I’m looking forward to playing the rest of the series.”

This was the unique time bomb format of the game which has a timer of just 60 minutes. A couple of days back, Aditya Sushant won this tournament and last night, it was Akhilesh Singh aka ‘Aone1’ who emerged victorious, beating a field of 184 entries, each paying the buy-in of INR 1,100 to take the prize pool up to INR 1.84 lakh. Singh and ‘Walao’ were part of a deal on the FT which saw the former being crowned champion with a prize of INR 17,811, while Walao was not too far behind, cashing in second for INR 17,645.

PokerBaazi has promised INR 5+ crore in guaranteed prizes through the series and we’re only halfway through at the moment, with 3 days still to be played out. For similar daily updates on the PPL Winter Edition 2018, keep coming back to GutshotMagazine.com.