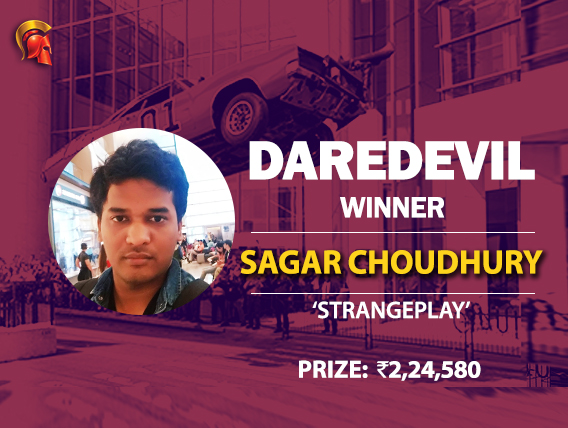 
There are those who like to party on the weekend and then there are those who consider grinding out a poker tournament into the late hours of Saturday evening their favourite kind of partying. It was something just like that last night at The Spartan Poker where a whole bunch of players crushed the guarantee at the DareDevil tournament. Outlasting the field was Sagar Choudhury a.k.a ‘Strangeplay’ who took down the title and a very nice payday to go along with it. It was an especially sweet victory for Choudhury who was the short stack entering the final table as well as the eventual headsup battle.

Saturday evening’s DareDevil tournament is one of the daily featured tournaments that takes place at Spartan. With a juicy guarantee of 6 Lakhs in place, it does tend to attract a good turnout on the weekend. What players also find value in is the fact that busted players are able to re-enter at 50% of the original buyin of INR 4,400! It’s almost a compelling reason to fire an additional bullet especially if one is doing well and runs into a bit of bad luck. That said, 302 entries surged that prizepool to a terrific INR 7,88,000 which would be distributed to the top 12 finishers.

It was a loaded final table with plenty of past title winners vying for a shot at claiming the title. There was Vidwath Shetty who plays as ‘RoronoA’ on Spartan who ran deep to finish in 5th place. The team manager for Global Player League (GPL) India’s Bengaluru Hackers team took home INR 57,130 for his efforts. Eliminated just after him was Rajat ‘Garammasala’ Sharma, who has been in good form off late. His most recent exploits on Spartan include taking down the Main Event at Spartan’s Little Big Series as well as topping September’s Hot Leaderboard challenge. This time though Sharma fell short getting INR 70,920 for his 4th place finish. Former IOPC title winner, ‘equity_hunter’ was the next to fall at the hands of ’tilting turtle’ who made his wheel Ace to Five on the flop itself. For second runner-up, equity_hunter scored INR 1,06,380. And with that hand, tilting turtle took a lead of 1.3 million chips into headsup against Strangeplay (898k).

Strangeplay battled hard to close the gap and a series of hands shortly into headsup saw him finally take the lead by a mere 20,000 chips. That was when the final hand went down on a board of Js 7d Qd Ac 4s, where Strangeplay with his Ace pair (Ah 3h) took down the title from his opponent tilting turtle (5c 8s). For the win Strangeplay won a handsome INR 2,24,580 while tilting turtle scored INR 1,45,780 for his second place finish. Sagar ‘Strangeplay’ Choudhury was also playing the ongoing Premier Poker League (PPL) taking place at PokerBaazi.com alongside the DareDevil. Choudhury, in fact won the Summit tournament at PokerBaazi just a few weegs ago. He was happy to take down a Spartan title after a fair gap but admits he had to consciously make adjustments to his gameplay yesterday,“It’s finally good to ship a tourney in Spartan after some time. I entered the FT as shortest stack, tried to pick my spots when 4 players were left. Surprisingly the structure looked deep in the FT because of the turbo-ness of the Baazi PPL.”

Another day and another title for the bright young poker talents of this country and today’s day will be of special interest as the top tournaments across Indian online sites take place on Sunday including the Millonaire Maker on the final day of the PokerBaazi PPL. We’ll bring all those roundsups and more right here at GutshotMagazine.com!