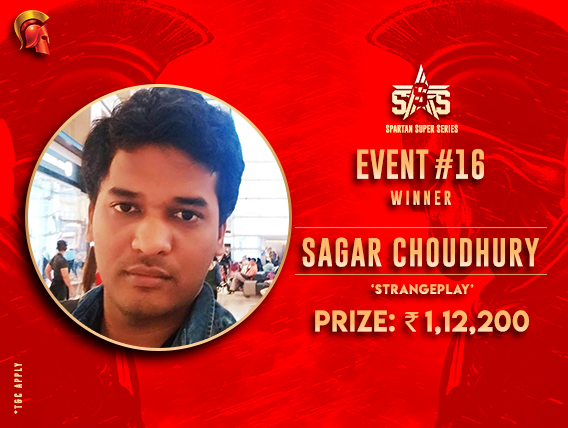 
Every poker player in the country knows about the Spartan Super Series (SSS) which is being contested currently on The Spartan Poker, as the 5-day series is offering a whopping INR 2.6+ crore in guaranteed prizes, along with leaderboard prizes to the most consistent players.

One of yesterday’s 5 scheduled tournaments was SSS Event #16 INR 5 Lakh GTD – a progressive knockout tournament with a buy-in of INR 5,500. It was the final tournament to kick off on SSS Day 3, with the Highroller also taking place simultaneously, which was ultimately taken down by ‘ReDut’ for INR 13+ lakh in prize money.

In the knockout tournament, our champion was Sagar Choudhury aka ‘Strangeplay’, who is another very regular winner in online poker in India, across most of the major platforms. Last night, the guarantee was slightly beaten with 204 registered entries, and he added INR 1,12,200 to his bankroll for shipping the tournament.

Choudhury had to beat a tough field before emerging victorious and that’s how it always is on Spartan. In heads-up too, he was pitted against Rubin Labroo aka ‘kornkid’, someone who has only been racking up poker victories in recent times, both live as well as online.

In last night’s tournament, the two were almost equally stacked before the last hand was played, with the blinds at 7,600/15,200 – 1,520 in Level #42 of the tournament. The flop opened Ad Th 3d and Labroo went all-in, revealing Jd 8d and a flush draw, while Choudhury made the call with Td Qd, holding a bigger flush draw and a pair of Tens too.

However, there was no other diamond card that opened, with the fourth and fifth street cards opening 2h and 4s respectively. Labroo didn’t hit anything on the board, while Choudhury won the pot with a pair of Tens. Labroo had to thus settle for the runner-up prize of INR 75,990.

Here are the other side event results of the night:

With a buy-in of INR 440, the first tournament of SSS Day 3 kicked off yesterday afternoon and a field of 185 entries registered, from where the top 24 places were eventually paid a minimum of INR 1,600. At the end of it all, the player who shipped the tournament for the top prize of INR 36,800 was ‘Vishu2204’, who outlasted the field including ‘JuntaDel’ in heads-up, who collected INR 24,720 for finishing second. JuntaDel was a strong contender as he won two SSS titles in the September edition, but last night, he faltered in heads-up, when his Queens and Sevens lost to his opponent’s Aces and Sevens.

This was the final side event, before two bigger tournaments kicked off last night. It was the only freezeout tournament of the day, where a total of 149 players joined the fun with a buy-in of INR 1,100, narrowly missing out on the guarantee. 20 places were paid out a minimum of INR 2,010, but the player to take away the biggest prize was ‘vngnc.d2’. He outlasted the entire field as well as ‘tikmann22’ in heads-up, for the top prize of INR 36,000. His opponent settled for INR 24,450 for finishing second.