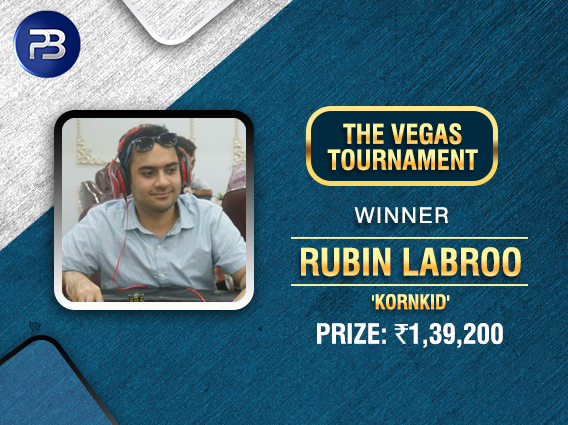 
Another night, another win. Rubin Labroo has adopted the ‘Eat, Sleep, Grind, Repeat’ formula and it seems to be doing brilliantly for him at the moment. He has shipped several major online tournaments in the last few months and nothing stopped him from getting another one last night.

The Vegas INR 6 Lakh GTD is a tournament that is contested every Wednesday night on PokerBaazi, with a kick-off time of 8pm and a buy-in of INR 2,200. Playing under the name ‘kornkid’ as he does on most major platforms, Labroo took down The Vegas last night, adding another title to his list of poker achievements.

Yesterday, a total field of 348 entries had registered to the tournament by the end of the registration period, bumping up the prize pool to INR 6.96 lakh. Labroo dominated this field and blew away many tough competitors to ship the tournament and add INR 1,39,200 to his poker bankroll.

The top 31 players were paid out a minimum prize of INR 6,960 and Labroo raked in the biggest profits of the night. While the field saw many big names, Labroo didn’t face a very tough final table, as there were a lot of new names here. He eventually beat ‘Loafer’ in heads-up who won INR 1,02,660 for finishing second in the tournament. Also finishing in the money were Sumit Silwal aka ‘silwal_7’, Sahil Mahboobani aka ‘ImHighIshove’, Vivek Singh aka ‘Nutpeddling729’ and others.

Gutshot caught up with the winner after he took down this tournament. Labroo was currently in Vietnam when we contacted him, having travelled there for the WPT and APT tournaments starting soon. Regarding last night’s tournament, he said, “It’s always fun playing on PokerBaazi – pretty deep final table and lots of playability.”

If you want daily updates on the top Indian poker companies and want to know if Labroo manages any deep runs in Vietnam, stay tuned to GutshotMagazine.com.