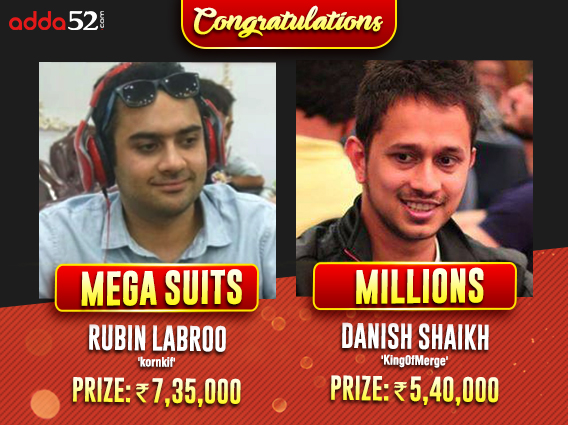 
Adda52 is known for hosting some of the biggest online poker tournaments in India, and most of these tournaments are scheduled for Sunday, a day where maximum players have the time off to grind for long hours. Yesterday was another Sunday on the platform which saw two of their biggest tournaments being hosted – Mega Suits and Adda52 Millions.

While it wasn’t a very happy Easter Sunday for those in Sri Lanka, it turned out to be a brilliant day in the office for Rubin Labroo and Danish Shaikh. Both are very popular faces in the Indian poker industry and yesterday, they both added a major title to their respective trophy cabinets. Labroo emerged victorious in the Mega Suits tournament while Shaikh bagged another Millions title.

288 players and an additional 185 re-entries took part in last night’s Mega Suits which had a buy-in of INR 5,500. It turned out to be a very long session for those who made it till the end, as the 6pm event went on till 3:09am this morning. From this field, only the top 49 players received pay-outs of a minimum of INR 16,500 each, but Rubin Labroo had his eyes only on the top place. Playing as ‘kornkif’ on Adda52, Labroo battled through a field which included India’s best poker players to be crowned champion.

The tournament had quite a few big names involved, including Pranjal Gandhi aka ‘lilmessipranjal’ who hit the rail in 6th place. Adda52 Team Pro Tarun Goyal aka ‘aggtarun’ made a deep run as well, finishing in 4th place for an INR 2.25 Lakh pay-out. Eventually, Labroo found himself in a heads-up battle against ‘gameank123’ who is an unidentified player but one who has made several deep runs on Adda52 in the past. Yesterday in particular was a good night for him, finishing 2nd here in the Mega Suits and also 5th in the Adda52 Millions tournament which ended a little later in the night. He took away INR 4.35 Lakh, while Labroo added a handsome amount of INR 7.35 Lakh to his bankroll, winning his first ever Mega Suits title!

We contacted Labroo after this victory and he said, “It feels amazing to finally close out a Mega Suits victory. I’ve had tons of deep runs and finishes in the final 2 tables of this tournament, but never won it before this one.  Fortunately for me, the final 20 players didn’t include as many regs as I would’ve expected. Overall, it was a fun experience. I waited for good spots to apply pressure and changed my strategy continuously based on the table draws. Once ‘aggtarun’ was out, I felt more confident of taking down the tournament.”

This tournament began slightly later in the night at 8pm, was played in the preferred 6-Max format and also had a slightly higher buy-in, that of INR 11,000. The entry fee itself tells you that it’s going to be a tough field to get past, and more often than not, you will find a known name winning this tournament. The same applied to yesterday’s Millions, with Danish Shaikh aka ‘King0fMerge’ taking down the title for a massive bankroll boost of INR 5,40,000.

He is an Adda52 regular and a consistent winner as well, having also taken down this tournament in January this year following a heads-up deal with Akshay Nasa. Yesterday however, he didn’t need any deals to be made, beating Kunal Vohra aka ‘kvohra’ in heads-up as the latter took away a prize of INR 3.4 Lakh. Overall, this became his third-ever Millions victory, joining Shravan Chhabria (5 wins), Aditya Sushant (4 wins), Nishant Sharma (3 wins) and Adda52 Team Pro Kunal Patni (3 wins) – those to have won this tournament three or more times.

Just to give you an idea of how tough this game would’ve been for everyone involved, Arjanveer Singh Chadha aka ‘arjan30’ finished 3rd for INR 2.5 Lakh, Aditya Sushant aka ‘A_Sushant’ hit the rail in 4th place for INR 1.9 Lakh and Shravan Chhabria aka ‘sweatmyass13’ finished 6th for INR 1 Lakh.

We’ll keep bringing to you all the latest updates from the Indian poker and gaming industry, so stay tuned to GutshotMagazine.com for similar stories.