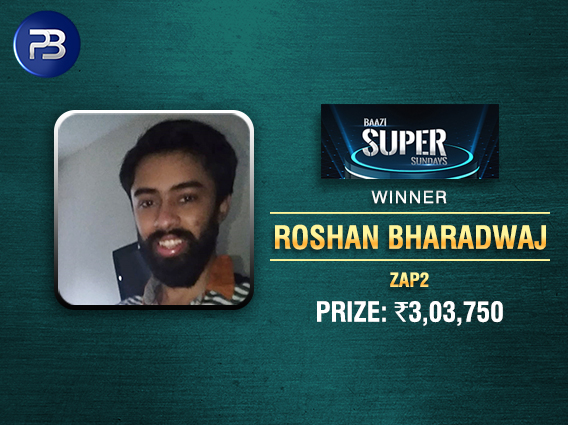 
Sundays are always good for poker players in India, with several top companies offering high-guarantee tournaments and promotions to their users. As a part of this Sunday grind, PokerBaazi hosts a weekly tournament called BSS SuperStack, which takes place every Sunday at 7pm IST.

Yesterday’s tournament attracted a total field of 275 entries (164 unique + 111 re-entries), with a buy-in of INR 5,500 and an advertised guaranteed prize pool of INR 15 lakh. The tournament finally came to an end, 7 hours and 4 minutes after it began, with Roshan Bharadwaj aka ‘Zap2’ coming out on top of this field.

The player beat some of India’s best online players to ship the tournament, where only the top 26 players were paid out, with a minimum cash prize of INR 18,750. Bharadwaj took home the biggest pay-out from this prize pool, bagging INR 3,03,750 for this long grind. ‘d00mtr00p3r’ was another regular in the mix, who finished 6th for INR 75,000, while ‘JasvenSaigal’ finished 8th for INR 41,250 and Goonjan Mall aka ‘gmtesting’ finished 10th for INR 26,250.

Gutshot caught up with Bharadwaj after this big win on PokerBaazi. The 24-year old used to be a pro gamer and had his own business of providing online gaming services such as boosting and coaching. However, he decided to pursue poker since the start of this year and began his journey from small house games to playing in a club in Vashi. “I started playing cash games there and slowly, with the exposure I got, I switched to playing online cash and MTTs, while also playing some live games on the weekends.”

When asked about the experience shipping this event on PokerBaazi, he said, “It feels amazing to ship such a major tournament and I’m really thrilled and excited for my future poker endeavours. I had come really close to shipping Baazi Super Sunday last month but ended up finishing second. This time, I was really focused and determined to ship the tournament and after it happened, I was quite happy and satisfied with my performance.”

“It started off like every other Sunday, where you have a lot of tournaments going on across different platforms. I felt like I had an easy starting table where I played quite aggressively and dominated the orbit, which helped me slowly chip up. I had gone card dead when we came close to the money bubble but thanks to a good period of 20-25 minutes, I quickly chipped up and had a comfortable stack to play with. During the final 3 tables, I felt like I had quite a wild table, where I thought some people were playing a much wider range. I decided to play tight during this phase. I got a few crucial double ups when I needed them and once again, I reached the FT. I decided to play super tight again, until the short stacks got eliminated and then started playing a wider range, eventually shipping the tournament,” he said, talking about his journey through the SuperStack.

Keep reading GutshotMagazine.com for similar updates on the top Indian tournaments, as well as interviews with winners of such top tournaments.

Don’t have an account on PokerBaazi? If you wish to play and and become the next big winner on their platform, sign-up now by clicking HERE.