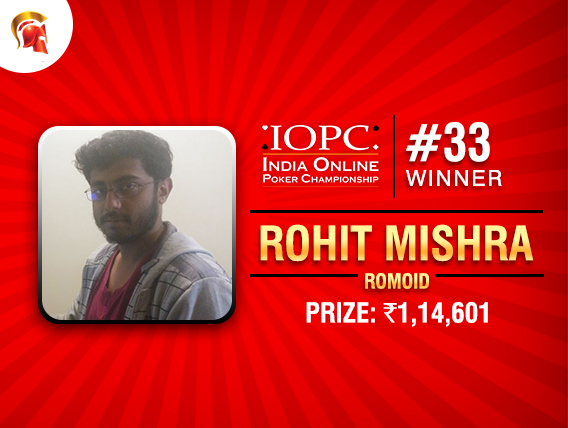 
The current edition of the India Online Poker Championship (IOPC) tournament series is being hosted on The Spartan Poker between 13-22 July and every poker player in the country wants to take home a share of the massive INR 7+ crore that is being given away over the course of these 10 days.

One player who has been consistently winning titles on Spartan is Rohit Mishra aka ‘Romoid’. He was a ‘Daredevil’ tournament winner just a couple of months back, taking home nearly INR 2 lakh and earlier shipped another Daredevil title in the last edition of the IOPC in January 2018. Another huge achievement came recently, when he topped the SSS Leaderboard last month, for INR 5 lakh.

Mishra held A-5 and his opponent had Q-2 going into the final hand. With 5-5-Q opening on the flop, Mishra was immediately ahead, and he went all-in on the river, with the next two cards opening 6 and 4. His opponent called, and Mishra took down the pot, with his three of a kind Fives beating his opponents two pairs.

Keep reading GutshotMagazine.com for similar updates on the remaining tournaments in this edition of the India Online Poker Championship.