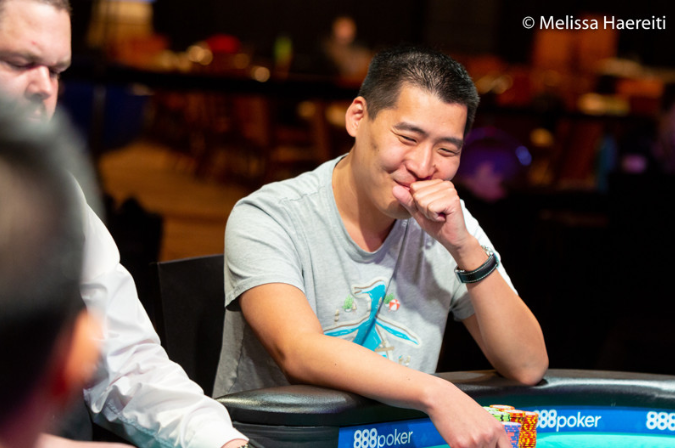 
We know by now that the 2018 World Series of Poker has been a good one for first-time bracelet winners, with new winners being crowned almost every day. In the ongoing Event #34: $1,000 Double Stack NLHE too, just one previous bracelet winner was among the final 20 that hit the felts on Day 4 of the tournament.

Even though the buy-in to the event was low, a massive prize pool of $5,130,000 was created, thanks to a huge participation of 5,700 entries over the two days of starting flights. Eventually, that large field whittled down to the last three men standing, Robert Peacock, Nicholas Salimbene and Joshua Turner.

With China’s Jacky Wong being eliminated in 4th place, it turned out to be an all-American affair and after a few hands in 3-way play, they bagged up to return for Day 5 of the event. Peacock currently holds a massive chip lead over the other two and he will most likely go on to win his maiden gold bracelet tomorrow and in fact, his maiden live poker title. However, it isn’t a foregone conclusion as yet.

Peacock just has one cash in the WSOP 2018 so far, finishing 821st in the Millionaire Maker Event for $2,621 and his career live poker earnings are just around $65k. He will be eyeing that life-changing prize money of $644,224 that has been set aside for first place, while even the third-place prize is close to $300k – five times that what he has earned in live poker till date.

Players will return to the final table to play the unscheduled Day 5 tomorrow morning and you can keep checking GutshotMagazine.com to see who ships this double stack tournament. Stay tuned.