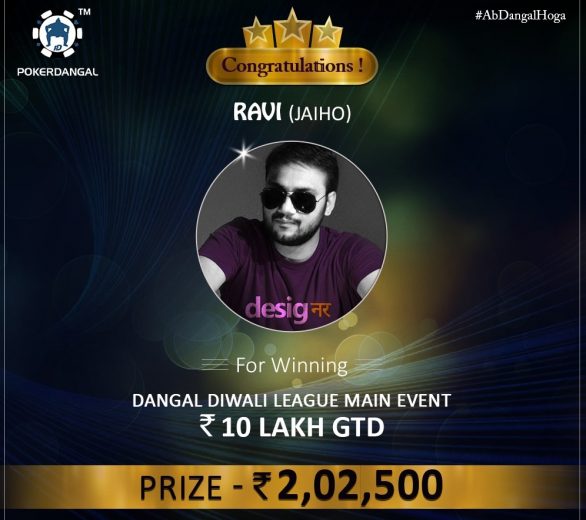 
PokerDangal is an up and coming Indian poker website which has been around for a while now and is growing leaps and bounds. The company completed its first birthday a couple of months back and to celebrate, they launched a series of high-guarantee tournaments and also announced their acquisition of defunct site, PokerMet.

Soon later, they launched their Dangal Diwali League and Diwali Dhamaka Series, which was their first ever tournament series that offered over INR 27 lakh in guaranteed prizes through the series. A couple of nights back, the DDL Main Event was also hosted on their platform.

The Dangal Diwali League Main Event INR 10 lakh GTD turned out to be PokerDangal’s largest single tournament thus far and it was a raging success. A total of 157 players played, each producing the buy-in of INR 3,850. From these entries, the top 26 finished in the money of the Main Event.

The tournament kicked off on 4th November at 7pm and by the end of the night, there was just one man standing who claimed PokerDangal’s largest individual cash prize ever. It was Ravi Sharawat who plays under the username ‘jaiho’ who outlasted the field and ended with all of 31,50,000 tournament chips in-play.

He was handsomely awarded for this victory, taking away INR 2,02,500 in prize money. It has been a fantastic last one week of poker on PokerDangal and the company will be hoping to keep up the good work in the weeks and months to come. The very next night (5th November), they continued their Diwali celebrations by hosting an INR 1.5 lakh freeroll as well.