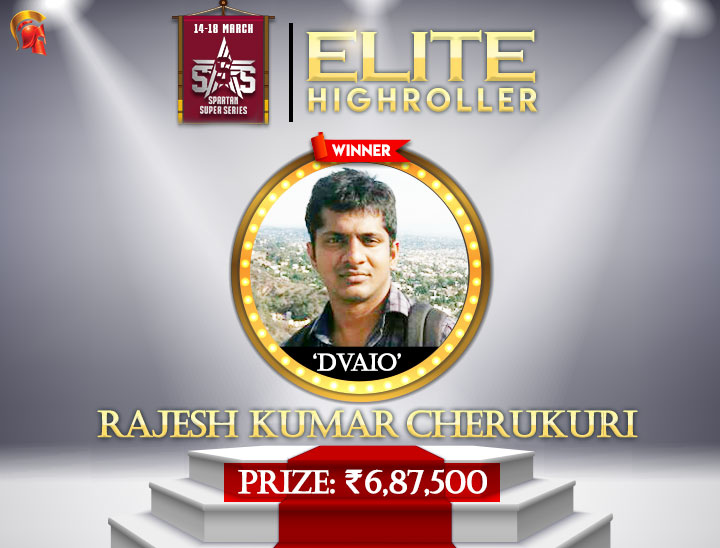 
The Spartan Poker is running their monthly series called Spartan Super Series and today is the fourth day of the series with the high featured tournament DareDevil scheduled at 7:30 pm with a buy-in of INR 4,400 and a starting stack 10,000. The tournament is a re-buy tournament where the player can re-buy with INR 2,000 for the same stack of 10,000. DareDevil is scheduled with 3 other big guarantee tournaments today. Let’s look at yesterday’s tournaments and the leaderboard.

534 participants came together for the first event of the day making a prizepool of INR 2,13,600. This prizepool was collected by the top 23 places with a min-cash of INR 2,478. Coming on top it was ‘jinx’ who took down the title for INR 49,662 defeating ‘Astroid16’ in the final round of the tournament. ‘Astroid16’ took home INR 33,642 for the second place finish.

The second tournament of the day drew 398 entries which was eventually shipped by ‘chalhatbe’ for INR 52,875. ‘chalhatbe’ defeated ex-Destiny winner Amit ‘Amit030’ Kumar in the heads-up battle. Kumar took home INR 35,600 for the runner-up finish.

The freezeout tournament of the day drew 170 players which was claimed by ‘Kings Fart’ who took a first place prize of INR 46,500. While the second place finisher ‘Pablo1029’ collected INR 31,500. The prizepool collected was distributed to the top 23 places with a min-cash of INR 2,320.

The featured tournament of the day saw 84 entries which was shipped by Bangalore based Rajesh Kumar Cherukuri for INR 6,87,500. Rajesh is playing poker since one year now and he mostly plays online only as he used to play live with his friends. He commented, “I usually play 6-handed table and Elite is also 6-max which made my victory simpler. It was an aggressive play in this tournament where the final table was a bit tough for me but every other player on FT played good.”

Rajesh defeated ‘Lag_gayee’ in the heads-up battle who collected INR 4,88,750 for the second place finish.

The last tournament of the day saw a participation of 278 entries which was claimed by Ankur ‘aryan89’ Aryan for INR 2,21,500 while Aryan defeated ‘pocket_aces’ in the final round of the tournament. ‘pocket_aces’ was rewarded with INR 1,49,500 for the runner-up finish. 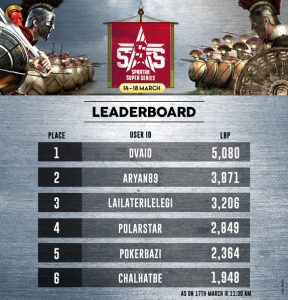 The leaderboard topper is none other than Rajesh Kumar Cherukuri who not only claimed the Elite HR last night but also the Destiny tournament on the Day 1 of SSS qualifying for Destiny SnG Finale which will be held on 18 March at 6:30 pm only on TheSpartanPoker.com.