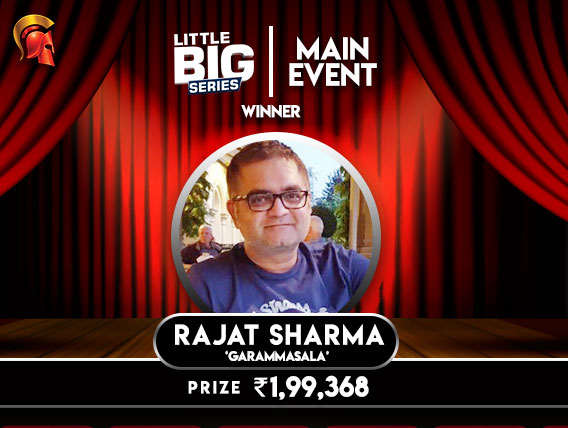 
The weekend brought about the final day of the Little Big Series (LBS) on The Spartan Poker, with the highlight tournament being the INR 10 lakh Main Event, shipped by Rajat Sharma aka ‘Garammasala’. Along with six tournaments being played on the final day, the LBS Leaderboard also ended yesterday, where INR 1 lakh plus tournament tickets being given away to the top 5 most consistent players in the series.

Here’s a roundup of all the tournaments played on LBS Day 4:

The first tournament of the day had a buy-in of INR 220 and 235 entries registered to the tournament, with the top 10 places being paid out a minimum of INR 3,000. At the end of it all, ‘grib’ took down the title, winning INR 34,800 for first place, while ‘pokeranand’ finished second for INR 22,380. The noon kick-ff tournament ended in Level #36, with grib hitting a Queen-high flush in the final hand.

The next tournament began at 2pm, with a slightly higher buy-in of INR 330, but the same prize pool. 288 entries registered to this event, with the final 24 players being awarded a minimum cash prize of INR 1,200. The eventual winner was ‘kcmc’, who bagged the top prize of INR 27,600, beating ‘Dhanraj Seth’ in heads-up, who won INR 18,540 for finishing second. The tournament ended in Level #40, with kcmc shoving all-in with pocket Sevens and winning with two pairs – Sevens and Sixes.

The guaranteed prize pool and the buy-in stayed the same as we moved into the third tournament of the day, where 274 entries registered to play. Eventually, the top 21 finishers were paid out a minimum cash prize of INR 1,500, but the player who took home the biggest prize of all, was Bhanu Prakash aka ‘spectre’, winning INR 28,800. In what became the final hand of the tournament, Prakash went all-in with pocket Tens, and he hit a Full House on the table, beating ‘HellFish_03’ in heads-up, who settled for the runners-up prize of INR 19,500.

This was the tournament that everyone was waiting for. The Main Event. Not many times can you participate in a Main Event with a buy-in of just INR 1,500, but Spartan makes it possible in their Little Big Series. A massive field of 804 entries saw the guarantee being beaten, and a new prize pool of INR 11.01 lakh being generated.

The top 72 players shared the spoils, with a minimum cash prize of INR 3,855, but the player who took home the biggest pay-check was Rajat Sharma aka ‘Garammasala’, winning INR 1,99,368. He beat ‘vngnc.d2’ in heads-up, who went on to become the LBS Leaderboard topper, winning INR 50,000 and Spartan tournament tickets, in addition to his prize of INR 1,44,294, for finishing second in the Main Event.

The fifth tournament of the day began at 8pm and a field of 328 entries registered to the INR 220 R+A tournament. The top 12 players were paid out a min-cash of INR 2,700 and coming out on top of this field was ‘Dhanraj Seth’, who won INR 34,200 after a runner-up finish earlier in the day. Finishing in second place was Bhanu Prakash aka ‘spectre’, adding INR 22,200 to his poker bankroll, after winning a title earlier in the day.

This edition of the Little Big Series concluded with this tournament, which had a buy-in of INR 550 and a prize pool of INR 1.75 lakh. A total of 228 entries registered to it and 23 players shared this money, with a minimum prize of INR 2,030. The tournament came to an end in Level #35, with ‘Iddu’ winning with pocket Fives over his opponent ‘kick_axxxs’, who just managed high-card Ace. Iddu walked away with the top prize of INR 40,688, while his opponent finished second for INR 27,563. 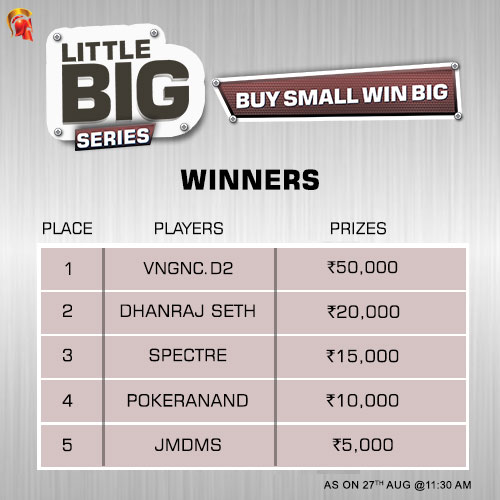 Keep reading GutshotMagazine.com for similar updates on the biggest poker tournaments in India and around the world.